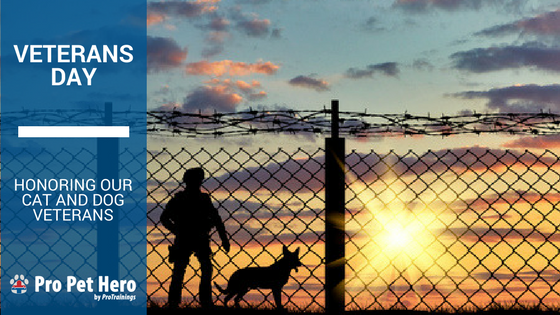 Because we are a pet-centric first aid & CPR course I won’t be spending much time honoring the human veterans that have served and protected us (not because they do not absolutely deserve it), I will focus on the feline and canine veterans – yes I said feline meaning cat.

I was impressed to learn just about a year ago the importance that cats served during wars like WWI. Cats were welcomed into the trenches and on the ships to help with rodent control. They also served as companions to the soldiers undoubtedly facing and experiencing such traumatic events from war.

This terrific article by Mark Strauss, states that “an estimated 500,000 cats were dispatched to the trenches, where they killed rats and mice; some were also used as gas detectors. At sea, cats had the run of the ship — a tradition dating back thousands of years”.

Cats had quite the purpose, value, and place in wars, a tradition that is not known to be continued today.

While there doesn’t seem to be any documented dog colonels, there certainly were plenty of canine sergeants and soldiers.

In this post, I want to focus on just one – for a couple of cool reasons.

Firstly, let me admit that I am currently writing this from my house where we are anxiously awaiting a litter of Boxer puppies. A breed I fell in love with 15 years ago only to realize through breeding practices that they were riddled with health issues. Because I could not change the breed I loved, I vowed to contribute to making it better by researching, studying and eventually making health, temperament and conformationally sound breeding decisions.

That being said, this litter will be named after the several veterans that have served and now passed in my family, as well as the potential for one being named after the dog mentioned below.

Vittles, who served alongside his human Air Force Pilot companion, Mr. Steber, who holds the record for flying the most missions during the Berlin Airlift with 415, was an integral part of the Berlin Airlift mission. US Air Force Pilots were tasked with risking their lives to fly over into West Berlin to provide much-needed rations to the citizens being starved out by the Soviet Union to force them to accept communism.

Vittles was a constant companion on the flights with Steber and sometimes when he would miss the takeoff due to snooping around, other pilots would welcome him on their planes. Eventually, his importance was recognized and a parachute was made just for him.

To learn more about Vittles and his story, click here.

Welcoming the New While We Remember Those That Served

For every 4-legged veteran that either had a specific job, protected life or brought joy to the sorrows of war, we salute you. We thank you for the job well done and the hard work you did or continue to do. While neither the cats or dogs that served our forces knew why they were doing what they were, they did so anyway and we as humans are appreciative.

Like Vittles, the little babies that will undoubtedly be born on Veterans Day are Boxers. Boxers are a working breed, destined for a true job. Some of these babies are off to be stars of the dog show while others will learn how to search for rats in a barn hunt, either way, they are born to work because they were bred to serve.

Since dogs and cats serve us in so many ways, remember to always provide and serve them. Provide a healthy stimulating environment, and always know what to do when they need you.