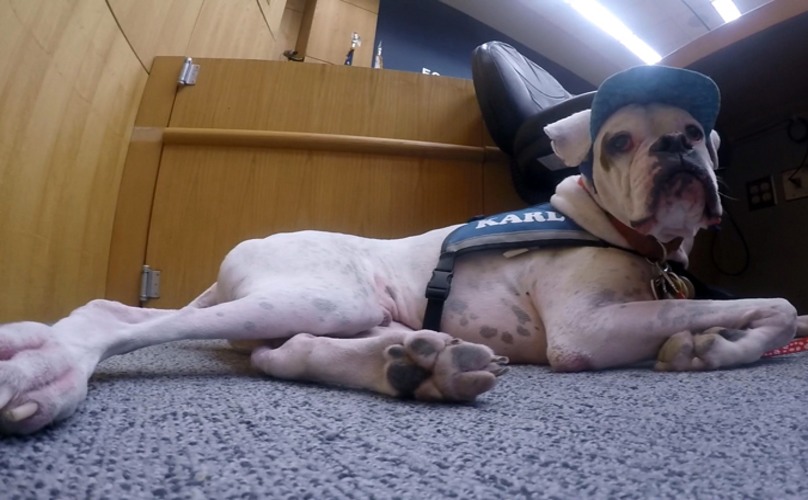 Dogs are built to work and therefore lots of dogs have many different jobs based on breed, temperament or a natural tendency to be helpful in a certain way.

In general, breeds of dogs were originally established to perform duties, whether herding, protecting, catching puffins off a mountain side (yes that is a real job of a breed bred specifically for that talent) to just providing comfort for their human companions. In this post I want to highlight some dog jobs that step outside the scope of usual and into the realm of downright awesome!

Down in Orange County Florida, the 9th district circuit court has a program called K9th Circuit Program. The program was created by Judge Turner who understood that dogs can serve as means of comfort to children who must testify that have been victims of abuse, emotionally challenged, or just need some comfort while testifying in a courtroom – a scary endeavor for anyone especially a child. These dogs can also be used to help adults. Studies have shown that people have better recollection and can perform better under the stress imposed by a courtroom setting when they feel relaxed and calm. Dogs help people remain relaxed and calm so its an excellent job for them.

Karl the deaf Boxer takes his job seriously, banging gavels, yelling “objection” and court outbursts don’t bother him. His job is simply to be by the child’s side as a comfort and as they may think, a protector. While Karl is not trained in protection, his 65lb self certainly makes a child feel much better when they must sit in the very courtroom with their accused abuser. His adorable hat is an added bonus to Karl’s appeal.

Another cool canine career is that of Piper, a Border Collie who works 4 days a week at a Michigan airport helping rid of birds. The birds hanging around the airport pose a serious danger for the planes as they can cause damage to planes taking off and landing by getting stuck in engines, landing gear or simply causing issues by colliding with the planes. Piper is not only making the airport safe for the pilots, people and cargo, this pup is helping to save hundreds of bird lives too!

From soothing children victims of abuse to saving birds and pilots, there are also dogs that directly save human lives with cancer detection. Leo the Cancer Detecting Boxer shares his life with a friend of mine from the Boxer community. He, like several other pups mentioned in the news story below, has gone out of his way to sniff out something that could snuff out a human life.

Then there are dogs that not only help save human lives, they risk their own to do so; skydiving dogs.  An elite trained explosive detection team of dogs in Bogota, Colombia fearlessly jump out of planes strapped to their humans. Once they land, their job of sniffing out bombs begins. The are a huge help to the anti-terrorist efforts in Columbia and undoubtedly save countless human lives.

courtesy of the DailyMail.co.uk

From mascots to mayors of town in California, dogs have served in all kinds of unusual jobs. While your pup might not be able to smell cancer or has a huge fear of heights, they still have the important job of loving you. Love them back by knowing how to recognize when they need help.

Oh and that strange breed I mentioned in the beginning of this post is called a Norwegian Lundehund, a dog bred to scurry up the sizes of rock cliffs using 2 extra muscled toes to help with grip, splay their front legs out to lay their chest flat for stability and ultimate reach into the honeycomb-like nests of the puffins, AND they can bend their necks back further than any other dog in order twist and turn up into the difficult-to-reach puffin nesting spots. Pretty cool, because these dogs could reach these puffins, many more people were able to survive and thrive in Norway where they originated.