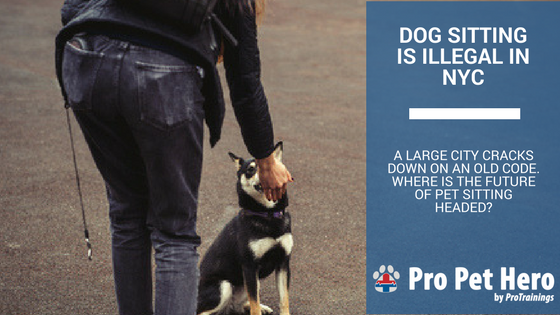 I cannot get away from this article about dog sitting being illegal in New York City. It has been emailed to me, Slacked to me and I’m pretty sure almost all of my Facebook pet sitting groups have posted it, not to mention the colleagues who have it on their personal walls.

So since I cannot get away from it, I’m going to embrace it and share my thoughts with you on why I think, even as a pet sitter that this article brings up some interesting things in the pet industry.

I previously discussed this topic in my blog post, The Regulation of the Pet Industry. I took some heat and always do when I suggest that regulation can be a good thing. I hear, understand and accept that like many systems in our world, they can be built incorrectly or built with good intentions but simply just break. I’m not here to argue that regulation is the answer to our problems but if built consciously and with the absolute goal of the well-being of pets in mind – regulating the pet industry could bring about some necessary good changes.

According to a withstanding New York City health code, it is illegal to accept money for boarding, feeding and grooming animals without a kennel license and these licenses cannot be acquired within a residence.

While this law may seem unreasonable, it is not unusual. In the cities and towns where I operate my business, we actually have similar laws. Commercial dog walkers are forbidden from using public land, no one can have 3 or more dogs on their premise without a kennel license and you can’t get a license within a 500 ft of a residential zone. Some towns will allow you to have more than three dogs but you can’t have more than one outside at the same time, all kinds of rules.

What to Do About It?

I personally do not agree with the NYC health code stating that you cannot receive money for providing care to an animal but I fully agree that this needs clarification. A kennel license is not the answer because no one can obtain one in residential areas. Setting limits might be a good start.

I think what the city is ultimately trying to do with this health code is to prevent animals from running out of control in the city. They need accountability of where they are and to make certain they are not costing the city money, more than the fee to license/register your pet with the city. The city has every right to know the amount of inhabitants, cat litter alone generates an UNBELIEVABLE amount of waste. Waste which the city must pay (with your taxes) to have removed. Things like knowing numbers of animals in households makes sense, up to and including setting a limit on the number of animals that one can have in their house makes sense.

While Wag is an app that can seemingly work around the law seeing as they are focused on dog walking, Rover is another story. Rover does offer walks but it also heavily focuses on providing full-time boarding care while the owners are away. This means the dog stays in the care taker’s home. I have certainly seen on forums people who use apps or are self-proclaimed professional pet sitters posting pictures of four, five, or even 11 dogs in pictures in one person’s apartment. What must the neighbor’s think? I wouldn’t want to drop half a mil on an apartment in NYC only to find out an illegal kennel operates next door and I LOVE dogs!

Education is the First Step

People are going to take care of pets, no matter how many $1000 fines the city’s health department slaps on pet sitter’s people go away and need their pets taken care of – that is fact. There are not enough kennels nor are kennels always the right fit for every animal. The senior arthritic dog, the fear aggressive dog, the dog aggressive dog, the stressed out cat – these are not your ideal kennel candidates. WE NEED PET SITTERS!

We need pet sitters that know what they are doing, we need them to do more than just love animals. We need them to know how to tell when something is wrong and ACT.

Rover has done a great job at connecting pet owners with people willing to pet sit. They have taken steps to reduce incidence by having questionnaires, quizzes and phone calls to make certain their listed pet sitter understands basic care and they even have a 24/7 trust and safety hotline that a sitter can call when they have a problem. But that assumes all these sitters know what a problem looks like. Their training doesn’t cover straining in the litter box, how to recognize and how important of an issue that can be. It doesn’t tell them the steps they could take if a dog gets hit by a car or has a seizure. The sitter is expected to waste valuable time to find their phone, call, explain and then be told what to do.

I propose regulation of the pet industry in the first form of education. People love their pets and they are trusting their pets in the hands of another “pet lover”. From the public’s point of view – since the pet care industry has little regulation, no requirement for education – the general public doesn’t know the difference between a pet sitter from an app to a pet sitter that works for a pet care company who has been trained to the nine’s. The app sitter could have also received the training but no one knows to ask or knows that it should be a requirement. We certainly know to only hire a licensed contractor on our house, certainly we can hire an unlicensed one but we know we are taking a risk – that doesn’t exist in pet sitting yet every time a pet owner hires an untrained sitter, they are taking a risk.

Uber finds car owners to drive car-less people around. That’s it, it’s as simple as that! Uber does not require driver education to make certain their passengers are as safe as can be, would you let an Uber driver take care of your pet?

Until there are standards of operations and regulations like there are for licensed plumbers, then pet care will continue to operate unhindered, or barely so. As many horrible stories of Rover or Wag sitters there are, there are actually more of professional pet care companies since they have been around longer.

We need to EDUCATE the market in order to effect change and create standards within our industry that the public knows about. One of those standards being that everyone caring for a pet (and owning one for that matter) is trained in pet first aid & CPR.

People know to hire a licensed plumber/contractor to do work on their house, they even have to pull a permit to do so and pay the city/town. That contractor is required to be licensed which means they went through an education program, an apprenticeship and then a master license program. Right now pet sitting, dog walking, training and even grooming under no law requires certification, ANYONE can claim to be one. Until that changes we have to continue to raise the bar and level of public awareness about WHO (qualifications, education etc.) should really be caring for pets.

What are your thoughts on this?

Here is the Huffington Post’s opinion on the matter.