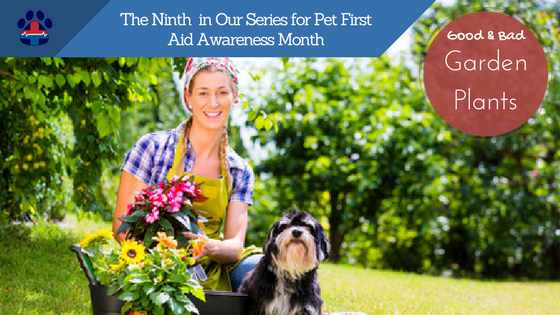 There are a plethora of blog posts stating which plants to avoid because they are dangerous for our pets and while I will cover the toxic plants to pets – I also want to share some beautifully safe ones.

I’ll preface this with the fact that my 3rd greatest love in life besides cats and dogs, is plants. If there were more time in my day – I would spend it gardening.

I reside in New England and spring is a big deal because it signifies “we survived winter”. Our parent company is located in Michigan and I know that stands true in that region as well. So while we survived and are eager to get in the garden, keep in mind what you plant matters.

Purple Basil – Yeah the green traditional variety is still totally safe but when your garden gets overloaded with green or you want to make a cool colored pesto – go with this plant. Its hardy after the threat of frost and ads a nice aroma if planted by your walkway or nibbled on by your pets.

Rosemary – Kind of the same deal as basil with the aroma but I wouldn’t go making a pesto out of this. You certainly can allow your pets to chew on sprigs or add some leaves to their food if they don’t turn their nose up. These plants can handle the frost and can be brought inside during the winter to last through until the next spring.

Fennel – Is another fun one that can be used in your culinary creations.  Your pets would have to eat a good bit of the bulb to get that licorice smell to their breath but thankfully it would be safe for them in moderation of course.

Pineapple Sage – OK, I know, you’re sick of hearing about herbs but this one is better as a garden plant than in your pasta. It smells LOVELY and attracts hummingbirds so when you forget to fill the feeder, they’ll take care of keeping the hummingbirds coming. Also perfectly safe like the other herbs to much on, only this grows taller than your standard sage plant variety.

Polka Dot Plant – Since I knew you didn’t want to hear about another herb I though the Polka Dot plant was a good one to mention for several reasons; yes it’s safe for our pets but it also makes a great ground cover that can get you away from all the green. It’s similar to the purple basil and while it does come in a green and white variety, I find the pink adds some fun to my garden or even planters.

African Daisies – Also known to the plant expert in your life as osteospermum – aren’t you glad you learned something today? These are harmless to your cat or dog and come in a variety of colors. They wont necessarily help their breath but they also wont hurt their insides in moderation. Any plant matter gobbled up in mass quantities could lead to a stomach upset. These daisies are also cool because they can handle a garden that doesn’t get as much water as it probably should.

Snapdragons – They’re pretty and have a pretty cool name. Another plant that wont make your pets sick in moderation and not one they tend to like to nibble. These are great to cut for floral arrangements around your home or to spice up a friend’s when you head out for a visit. They also have a neat interactive element – you can gently squeeze the sides of the flower and watch the jaws of the dragon-like petals snap shut.

Coral Bells – Here’s another cool Latin name for you, Heuchera. You don’t buy or plant these guys for their flowers because they don’t last long and are quite small in comparison to the leaves of the plant. This comes in a wide range of colors and finishes like mat or glossy.  They’re pet safe and cover a good amount of space with very little maintenance.

6 Plants That Are Toxic to Pets

You most likely have some of these in your yard, I do but knowledge is power. Know what is dangerous to your pets and most importantly – know how to recognize any symptoms so you can act quickly.

Lilies – In my Easter blog I discussed lilies. While all varieties are toxic to our furry friends, our kitty companions could suffer some serious life-threatening issues. Peace lilies and Easter lilies can cause a shutdown in kitty kidneys. While they’re gorgeous to have around the house and even inside, let this pretty picture be all that you need and avoid them at all costs. Oh and they attract lots of bugs which makes them have lots of pesticides sprayed on them -that just adds to their toxicity.

Amaryllis – Oh the lovely Naked Lady, she’s dangerous though. As pretty as she maybe, if Fluffy or Fido takes to munching on her you’ll be left with a drop in blood pressure, shallow breathing and terrible tummy trouble.  She’s a pretty and powerful plant so leave her out of your yard.

Azalea – This picture doesn’t get any fresher, it’s straight from my yard and in an area none of my pets will be – I even captured a cute bee bum! My poor kitty gets her vitamin D from our fully screened-in back porch but she is a proud indoor only kitty. I have caught several client dogs nibbling away on this seemingly excellent chew toy. According to the Pet Poison Helpline,  “these plants contain grayanotoxins which disrupt sodium channels affecting the skeletal and cardiac muscle. All parts of the plant are considered poisonous, and as little as ingesting 0.2% of an animal’s body weight can result in poisoning. When ingested, clinical signs include gastrointestinal signs (e.g., drooling, vomiting, diarrhea, abdominal pain, inappetance), cardiovascular (e.g., abnormal heart rate, heart arrhythmias, weakness, hypotension), and central nervous system signs (e.g., depression, tremors, transient blindness, seizures, coma, etc.). The overall prognosis is “fair with treatment”. I’m glad that the prognosis is fair with treatment but it certainly helps to know that your pet is acting that way because they were chewing on your Azalea. It’s best to not give them access EVER.

Cyclamen – This plant can be confused with the safe Heuchera mentioned above. They are sort of alike, I know I can hear the expert gardeners saying they are nothing alike given the size of the leaves but they are – you know it. Until my trained gardener eye I wouldn’t be able to tell the difference unless they were planted next to each other. Only this one isn’t safe – according to the ASPCA, cyclamen can be toxic to cats and dogs and the highest concentrations of the toxin are usually found in the roots of the plant, with smaller amounts in most other parts of the plant. Ingesting cyclamen will result in heart issues, seizures, and they claim “possible death” – uh OK, yeah this is on the do not buy list. If you recently bought a house I’d go make certain these plants weren’t hanging around. While a cat is less likely to go rooting around for the roots, it’s still not one I would have in my garden.

Daffodil – OK, I am guilty – these are accessible to my dogs in the backyard. You can see the bit of fencing behind them as this picture was taken mere hours ago and the catalyst for this now long blog post. The illness caused by being chewed by cats and dogs is similar to their Naked Lady plant friend mentioned above and while my dogs do have access – they are never unattended in my yard. These happen to be near where they poop – not that they still couldn’t chew on them but they like to dump and run. 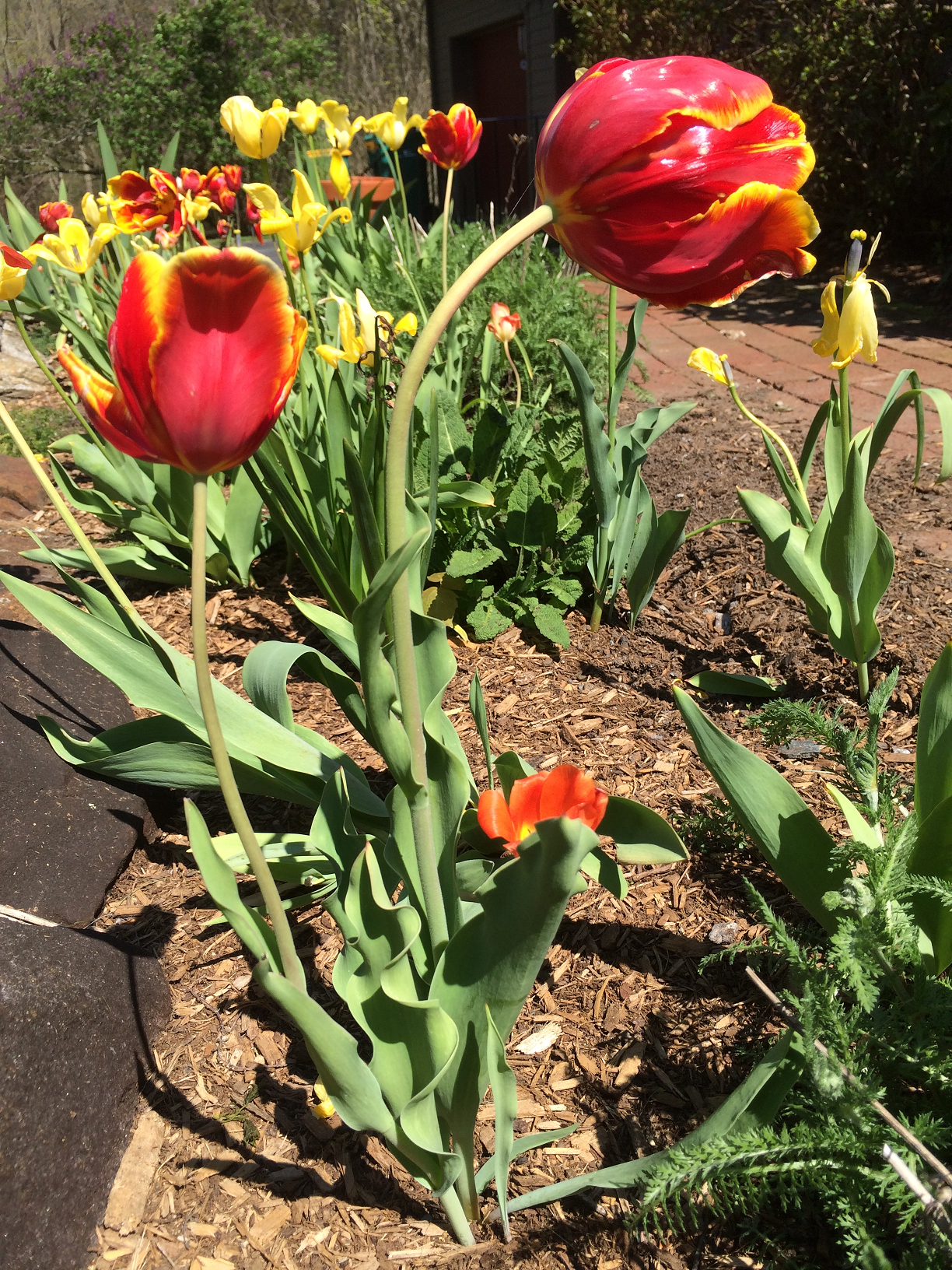 Tulips – I have planted over 400 of these bad boys in my front yard and they look marvelous when they aren’t passed like sadly this picture from last year depicts. Unlike the daffies mentioned above, the bulb of this plant is your biggest concern. For dogs it does look just like a ball, fun for chasing and chewing but that could lead them to have irritated mouths. You’d know because they would be drooling and potentially have trouble swallowing. Ingestion would lead to GI issues, increased heart rate, and difficulties breathing.

Plan What You Plant for Your Pets

There are hundreds more safe plants and toxic ones. Its important to know what region you are in and to find out which are safe and which are not.

Plan your garden to be beautiful but pet safe. The only thing that should be buried this spring is your bulbs!!!

Do you know what to look for when your pet seems off, do you know how to check their vital signs to make sure it’s not your heart racing from being worried? Take our pet first aid course now – it’s no coincidence that April is Pet First Aid Awareness month – its when so many accidents happen. Toxins popping out of the grounds – bugs coming out from their winter holes. Its a beautiful nightmare at times. I’ll hit up how much bugs suck in the next post. Until then, go play in the dirt but play safely.