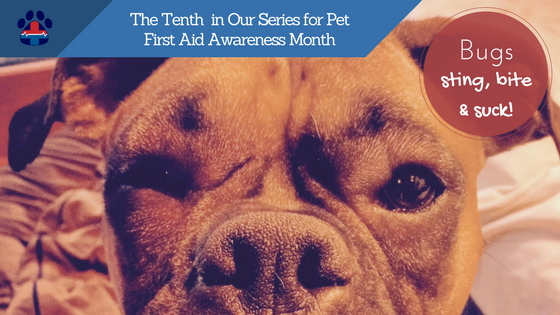 We have to be aware of these pesky pests and keep in mind even indoor bugs can wreak some havoc. Our feline friends are certainly likely victims of fleas, flies, ticks, wasps, bees, spiders and mosquitoes but it’s our canine companions that tend to suffer the brunt of the stinging, stabbing, and biting variety. The canine’s curious nature has them shoving their snouts into areas they don’t belong and the wasps have no problem telling them they have disturbed their territory.  While my cat definitely plays with and ultimately kills plenty of bugs, she has been the least likely victim or their attacks – maybe she is just more stealthy?

Be Aware of What Bugs Are There

Preventing bug bites and stings can be a challenge – just running in the backyard could disrupt a wasps’ nest. My dogs were clobbered the other day when I accidentally threw the Frisbee onto the deck. Apparently wasps had set up residence under the eve of my deck roof and my dogs – while just trying to get their beloved fris – were bombarded by the dive-bombing demons!  My male ended up with a few stings on his legs but my little girl got stung several times by the eye. Into the house for the ice packs and Benadryl I went with two disgruntled and now painful pups in tow. They were flailing, nibbling and pawing at their stings, I almost didn’t have enough hands to help them. I was lucky that I knew what got them, there have been plenty of times that I did not!

my boy Artie, we have no idea what got him but it was certainly in the face!

I’ll leave the chemical pest control talk to your veterinarian. That’s a regional issue for certain but please do make yourself aware of the dangers that exist to your pets. While preventing bugs from sucking, biting and stinging is its own challenge, recognizing when they have been victims of such pestering can be just as difficult.

When Your Pet Gets Stung

one of my pups who was bit by a bug near the eye!

When a pet is stung or bitten by a bug they may flail around like they are being attacked by an imaginary army. They may bite the air or at their butt where they received the bug blow – or even try to paw their face off. I have seen dogs get stung by a bee and for YEARS afterwards, any fly or bee-like sound throws them into an uproar- so make sure its the real deal if you have one of “those” dogs.

If your pet is acting erratic your best course of action is to figure out why. First try to calm them down so you can find some sort of origin point or points for a bite or even a stinger.

For some bites or stings your pet might not flail or even paw – they will just swell.

The concern with swelling will be making certain they do not go into anaphylactic shock, which is a hyper overreaction to the bug bite or sting and make certain they can breathe. Bites around the face and neck that cause swelling can also narrow breathing passages. Consult with your veterinarian about proper dosing of antihistamines and if you are unsuccessful at getting the swelling to go down or it gets worse – go to the ER vet!

Even if they show no signs or symptoms of being bitten or stung, being proactive and performing bug checks can be vital. We live in a region littered with ticks, literally about 100 miles from where Lyme disease was discovered so it’s a real threat and annoyingly it is carried by one of the smallest ticks called a deer tick. After every hike or romp we go over our dogs thoroughly and we are lucky having short-coated Boxers. I have plenty more to say about ticks here but please develop a system for your pets that routinely checks for the pests prevalent in your area. Don’t just rely on the set-it-and-forget-it pesticides you apply to them or to your yard.

In general, always know what pests are present in your environment – especially if you travel. Know the hazards in your region and those that you might travel or move to. Bites and stings can be horribly uncomfortable for your pet. No pet wants to spend these gorgeous months sidelined and certainly no one wants to spend time at an ER vet. Take precautions now, learn pet first aid to recognize the signs and symptoms and make certain you have the right dosing available in your pet first aid kit of antihistamines like Benadryl – check those expiration dates too. Keeping our pets free from pests is one of many ways we can help keep them safe.