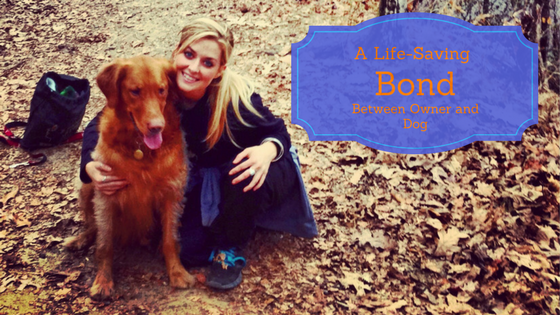 “What a beautiful world it would be if only people had the heart of Dogs.”

I was a sophomore at the University of Alabama when I decided to get a puppy. I thought it would be easy; I grew up with dogs so why not get one of my own?

When I was back home in FL for Christmas break I adopted an adorable Golden Retriever puppy against my parents wishes, of course. Well it didn’t take long for me to realize that my adorable puppy was a full time job and I was in way over my head. I named my puppy Bella, and brought her back up to school with my 3 roommates and me.

She was a wild puppy, so misbehaved and I felt like I just couldn’t handle her anymore. As a college student I had a very busy social schedule and was definitely not ready to be a dog mom. At times she would frustrate me so much I would sit on the floor and cry and yell at her, “WHY DO YOU DO THIS TO ME?” I called my parents for help but they insisted that I learn from this and follow through with my decision. In reality it wasn’t her fault I had a lot to learn about being a dog mom. She was such a handful she earned the nickname, “Hells Bells.”

In time though Bella and I stuck it out together; she taught me how to be a better dog mom and I taught her how to be a better dog. As we grew up we became best friends and we did EVERYTHING together. She was a college dog and if I couldn’t leave her home I decided she would just come with me. Bella went wherever my social calendar took us; pool parties, tailgates restaurants, bars, parties, friend’s houses, even dates with me! We loved spending time together and went for daily runs and summer swims.

By the time I was a senior, Bella and I had an unbreakable bond she was truly my best friend. She had met all my friends and a ton of people at school. Sometimes my friends would just walk into the house without knocking just to stop by and hangout with Bella and me. Bella grew up to be a beautiful 85 LB golden retriever, in other words she was huge not fat but all muscle. I would hear comments that she was the largest golden they had ever seen or mistaking her for a male because of her muscular build. Everyone loved Bella she made friends everywhere we went besides her intimidating size she was a complete goober. She loved people and other dogs always friendly to those she knew and strangers. My roommate and I always had friends over sometimes they would just walk in without knocking, Bella never cared even if she didn’t know them.

I worked at the local college bar not far from the house and one night I was running late. Bella and I had been with friends down the street when I realized it was already 9pm and we had to rush home so I could make it to work. I had to be at work at 9:30 so I was in a huge rush. I ran in throwing open the front door and jumped in the shower. Bella followed me into the bathroom and laid in her usual place by my side on the bathroom floor. Suddenly I heard my front door slam open, I paused it was so loud I thought it was odd. My roommate at the time was flying back into town and was supposed to be home at 10pm but it was earlier and usually she wouldn’t enter the house like. She also would always call when her plane landed. I thought something was odd so I turned off the shower and yelled her name; no answer. I look over at Bella and she was crouched facing the bathroom door growling, snapping, covered with foam around her mouth and the back of her hair raised. Instantly I knew something was seriously wrong. I have NEVER seen her like that before, someone was in my house and I was in danger.

I was terrified I was completely naked and soaking wet; I felt helpless. Bella suddenly charges towards the bathroom door I hear a struggle in the living room crashing of furniture a man yelling, then the front door open again and Bella barking after him. I jump out of the shower get dressed and called 911. After I called the police I went outside to call Bella, she came back unharmed and I notice that the intruder when he entered had dead bolted the door behind him. The fact that he locked the door behind him sent chills down my spine, but when Bella attacked him he couldn’t get out fast enough that he had to rip the door from the frame. She was my hero!

As the police asked questions and searched she stayed by my side the whole time. The police had found a man hiding behind a house a few houses down with a broken forearm and blood on his shirt consistent with dog bites; the officer said Bella broke his forearm. They brought him in and asked me to identify him but the truth was Bella had acted so quickly and bravely I never had a chance to see him. Bella identified him though; she went nuts when she saw him again. The police could not detain him without proper identification but when he was further searched they found drug paraphernalia on him and with the injuries consistent to my story they arrested him.

Bella was my hero and I am so thankful for her courage that night. I cannot imagine what could have been if she did not reacted so quickly and bravely. There is no doubt that a bond with your dog goes far beyond a friendship; it’s a connection that is almost spiritual. She was such a goofy Golden Retriever but that night she was strong, fierce, and brave – she saved my life.

I often think she was an angel put in my life for that very moment. She was such a large strong dog beyond average for a female Golden Retriever and if she wasn’t so large could she have stopped him? Would the police be able to identify him? All those days and nights of getting upset with my new puppy regretting my decision all lead to that moment.

She was the puppy I didn’t want to the friend I didn’t deserve. Bella was my hero, my best friend, my guardian angel, and my heart.

Please share my story, I would like Bella’s name to live on. She was remarkable dog that went beyond her call of duty. Unfortunately I lost Bella in 2014 to cancer, she may be gone but never forgotten. She is always in my heart reminding me everyday to be strong and brave.

We never know when, if or how our animals will come to our rescue. Some have simply done so by being in our lives while others have a moment in the future where they will shine. Either way we owe it to them to know how to be their hero, learn how to save them now. Help prevent issues, make an emergency have less of an impact and learn to recognize when something isn’t right – so we can rush into action to protect the furry family members that are our 4-legged heroes.

Kelley Knott  is a University of Alabama Alumni, Florida native, and striving CEO of Intrepy Healthcare Marketing based out of Atlanta, Ga. Kelley recently married the love of her life Justin Knott in December of 2016 and the two of them enjoy building their company and spending time with their fur baby family. Kelley is a passionate animal lover who thinks there is no love and friendship than that you build with your pets.  Kelley was born and raised in Orlando, Florida and spent most of her time in the water and the sun. After high school she moved to Tuscaloosa, Alabama as a student of the University of Alabama. She studied communications, rescued animals, adopted her first pup Bella, survived the 2011 tornado with her Bella at her side, and graduated ready to cease the world! Not long after college Kelley, Bella and her fat cat Mr.Gryphon moved to Atlanta to pursue a career in marketing. After working in the Healthcare Marketing field Kelley decided to apply her knowledge and experience to pursue her dream to start her own Healthcare Marketing Firm. She partnered with Justin Knott and the two of them have built a budding Marketing firm in a big city. They enjoy watching their hard work, dreams, and ideas grow. When they are not conquering the world together they are spending time with their 2 dogs and Mr. Gryphon. They both are animal lovers and advocates and when they travel the whole fur fam goes with!