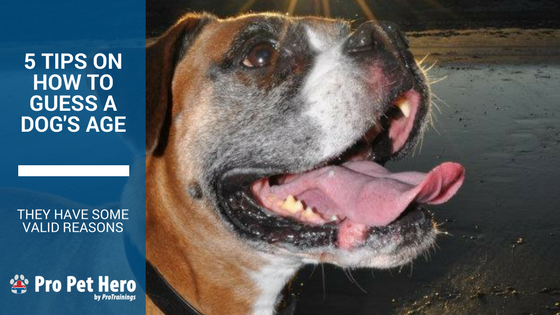 I’ll not lie, one of my favorite things to do is guess a puppy’s age. Not three days ago was I walking around the conservation area near my house with my dogs when we ran into a Great Pyrenees puppy. Despite being already taller and outweighing my two-year-old Boxers, I turned to the owners and asked, “is he between five-six months old?” In a pleasantly surprised tone one of the gentlemen exclaimed, “yes, he’s one week shy of turning six months old”.

Admittedly puppies are way easier to discern age, I can nail it down to the week for most but when they get above two years old, guessing their age gets a bit more difficult.

Having been primarily a dog walker and having owned a pet supply store for the past 14 years, puppies came into my life pretty much on a weekly basis. If they weren’t a new walking client, they were a new pet food customer so I had my eyes and hands on a lot of little wiggly puppies – so exposure is certainly on my side. There are ways though in fact that you can determine a dog’s age who has made it passed the puppy phase.

5 Ways to Help Determine the Age of a Dog

A dog’s teeth can tell us a lot of tales about their lives. From their diet to their toy of choice, teeth tell a lot.

Generally, it takes time to have plaque, tartar, stains, and damage happen to teeth. Veterinarians have a decent way of aging dogs by their teeth but it can still be very tricky for them. Depending on the dog’s face shape, their diet, and if dental care has ever been provided, it is possible to tell how old a dog is by the condition of their adult teeth.

The eyes of a pet can be a passage to their soul but also a clue to their age. Much like humans, dogs can in their older years get cataracts, a cloudy white film on the outside of their eyes. This can be misleading about age because in some breeds of dogs it can happen before the age of two!

If you do see a bit of cloudiness in the eye, not on the outside of the eye, this could be indicative of a common condition called lenticular sclerosis. This is a benign condition that has a typical onset between six-eight years of the dog’s life, thus making guessing an age with a dog that has it to be above six.

Similar to teeth and eye conditions, a gray coat may not always be a good indicator of age. For some pups, it’s hard to tell a gray coat that has come in due to age versus a gray coat that is their natural color. However, if you have had the dog for a while or it’s a breed that is typically solid color (and not gray) then the signs of the silver hair can help you guess that they are getting on in their years.

Dogs can have all kinds of temperaments, from downright crazy to just down. My family has owned several Labs over the years and their temperaments alone have varied widely. We’ve had some rambunctious seven-year-old Labs and even a two-year old that acted like he was 10.

Personality aside, generally a more energetic or spasmodic dog would typically be on the younger side. Again, like the other variables, this is not perfectly scientific and a lot can be based on the actual temperament or demeanor of the dog.

A lot of the dog’s fitness can be a product of their environment – you! If you overfeed and under exercise your young dog, they will act like an old out-of-shape dog. If you provide your pet with an optimum calorie intake and proper exercise, your dog will age based on normal factors.

Older dogs as indicative of their slowed down behaviors mentioned above tend to burn fewer calories and thus gain weight more easily. They may also have minor aches and pains as older humans do so a slight limp or taking caution on the stairs can certainly be a sign of an older pooch.

As with any of these ways to help determine the age of a dog, there are plenty of variables that can skew the age you think they may be. In general, if the teeth are stained, they lack that sparkle in their eye, they have gray on their muzzle, nap frequently and are slow to get up from their bed, you most likely have a pup that is older than 6.

Most importantly, it’s your responsibility to be able to recognize the signs of aging. Make yourself aware, by taking a pet first aid & CPR course to learn the signs and many symptoms of issues that could just be aging, or could, in fact, be serious concerns.