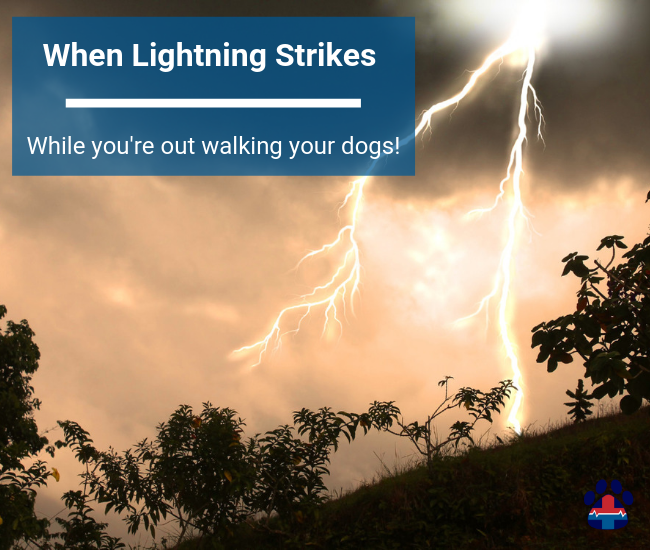 Lightning Strikes in Many – and Surprising – Ways

By our master instructor, Arden Moore

I am going to cherish each and every day with more gratitude. Why? Because on August 27, 2019, my dogs, Kona and Bujeau and I survived being struck and we could have been killed by lightning due to a sudden and strong thunderstorm.

I also have newfound respect – and knowledge – about how lightning strikes. It doesn’t just strike downward, but it can side flash and cover more miles than you would realize.

Every Morning We Walk

Arden Moore with her pups Bujeau and Kona

So, let’s go back to the morning of Aug. 27. Every morning, Kona, Bujeau and I get up early before the Dallas hot temperatures are in gear and take a two- to three-mile walk around Whiterock Lake park. This large park – I jokingly refer to as the Dallas version of New York City’s Central Park – features paved sidewalks, lots of shade, drinking fountains for people and dogs and many miles of trails.

On that morning, the temperatures dropped 20 degrees from the day before – about 72. Finally, a cool day! There was a very light drizzle and cool winds.

Halfway through our route, the sky suddenly became dark and menacing. I heard the first clap of thunder and counted seven seconds before I saw a flash of lightning in the distance. For years, I mistakenly thought each second between thunder and lightning represented a mile.

That’s just not true. According to the National Weather Service, if you can hear thunder and then see lightning within 30 seconds, you are in the danger zone of lightning strikes.

We started back at a brisk pace on a tree-canopied long paved trail – about one mile from my SUV. About 2 minutes later, the space between the thunder and lightning was 3 seconds. We had no place to hide.

And, then it happened. The blinding lightning bolt struck in the center of the sidewalk about 20 feet in front of us. The boom was commanding and startling. Instantly, the hair raised on my arms and it felt like stinging needles on my fingers and toes.

As I do when I teach people to become Pro Pet Hero Instructors and pet parents in my basic pet first aid/CPR classes, I knew I had to be in the moment and not panic. We can’t control the past and we need to focus in the NOW – BE IN SURVIVAL MODE!

I also knew that we had to move – quickly. I said in a confident, in-charge tone to Bujeau and Kona, “Run! Let’s go!” I reined in their leashes and kept them close by my side. I needed to keep them focused on me and not the storm. Standing still in a lightning storm makes you more of a target. Running lifts at least one foot – and two paws — off the ground to prevent getting a full jolt.

We raced to my vehicle and were able to get inside safely. I quickly did a full head-to-tail assessment on each dog, especially checking their paws for any burns and massaging their bodies to detect any possible internal injuries. Fortunately, both seemed fine.

At home, I did what I tell my students to do – I performed repeated health checks on Kona and Bujeau every 10 to 15 minutes to detect any signs of pain or injury. Both were fine and accepted a small treat and drank water. I experienced a headache and tingling in my feet and fingers for about two hours after the incident.

For a full explanation on all, click on this NWS link: https://www.weather.gov/safety/lightning-struck

The odds of being struck by lightning in your lifetime are 1 in 10,000. I am hoping that I will not have to experience another strike.

Please help people separate fact from myth when it comes to one of Mother Nature’s deadliest weapons – lightning.