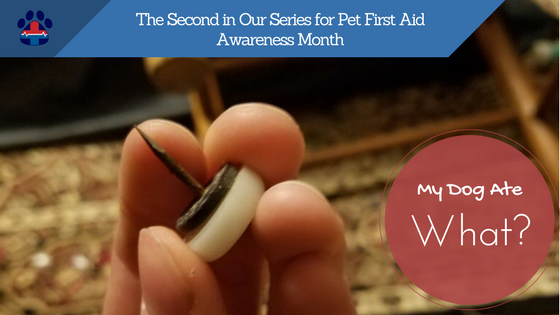 Continuing on with our series for Pet First Aid Awareness Month, now we will discuss foreign body obstructions.

The TV Show – My Dog Ate What?

Back in 2010 there was a great TV show on National Geographic called “My Dog Ate What?” I loved that show and was sad to see it go. The episodes covered real incidents that people had with their dogs eating things like underwear, pin cushions, rocks from under the grill, glass and chocolate. They did a decent job reenacting the scenes.

Sadly that show no longer exists but boy do the those situations. In the past year alone my dog walking company has seen two pups go under the knife to extract objects they ingested and caused a blockage. One was Angie, a Chesapeake Bay Retriever who ate 7 socks – not much for pairs! The other was Kona, a small Schipperke mix who decided to swallow the plastic piece often nailed into chairs to make them slide better on carpet.

I want to talk about Kona’s story because while Angie munched down a pile of socks, her family knew what she had done. Kona’s story was more detrimental in that we weren’t aware of the missing plastic bit until Kona started showing signs that he was seriously sick.

Kona came to stay with his dog walker for some overnights while his mom traveled to Florida. He had stayed with his dog walker before, she knew him well. One day after returning home with Kona she left him to go to the gym, as she had many times before confined to her dog-proof room. All seemed well she returned and he ate dinner as usual. It was the following morning when the trouble started.

It started with Kona waking up and throwing up first thing. He threw up twice, it was just foam so not much concern. Kelly waited longer to offer him breakfast. He ate his breakfast tentatively, which was odd. Then shortly afterwards, he threw up all of his breakfast. Had Kelly any idea that he ate something, Kona would have been at the vet already. She was in contact with his owner and they decided to wait through one more meal, not feeding him so that his stomach could settle. The next morning he threw up more foam and was clearly not himself. She presented him with food only to see if he had interest which he did not. Off to the vet he went.

His regular veterinarian couldn’t tell anything from his presentation so he suggested he be taken to the ER vet who also has an ultrasound machine. Off to the ER vet Kona went and sure enough, the ultrasound revealed not only a foreign body obstruction, but a concerning mass on his spleen. Emergency surgery scheduled and performed, and the object as well as his spleen came out.

Kona had decided to munch on the little plastic disc from the bottom of a chair that he either chewed off or it had fallen off unbeknownst to Kelly. A larger dog may have passed the item without incident but Kona is a whopping 11 lbs, there was no chance that it could make it through his digestive track. We’re still amazed that he got it down his throat without choking!

There is a double edged sword here in this lesson. While most vets will commonly advise you to not bring your pet in after 1 or two episodes of throwing up, they will tell you that throwing up coupled with different or odd behavior is a clear sign to get your pet to the vet within 24 hrs. Since Kona was showing interest in food and had only thrown up foam a couple of times, there wasn’t a distinct sign that he needed immediate veterinary care. When he threw up again and didn’t want to eat – which is an odd behavior for him as he LOVES his food – we knew he needed medical attention.

Always err on the side of caution and call your vet with concerns. It’s not pleasant to pay for a visit to find out nothing is wrong but an upset tummy – it is much worse to not apply the first aid of recognizing an issue and acting by taking your pet to the vet when something serious is wrong. First you need know what to look for and you do that by taking a pet first aid and CPR class.  If your pet is acting strange in addition to throwing up, don’t waste any time and get them to the vet!