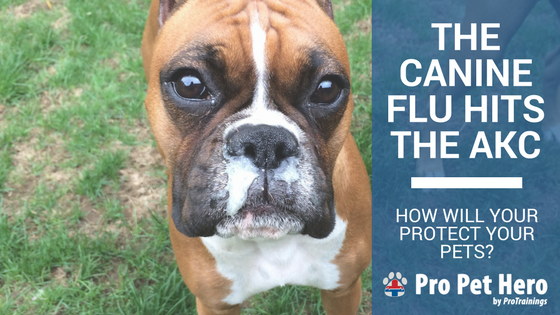 I can’t go a day, let alone an hour without hearing, reading or talking about the canine flu. The canine influenza virus – (CIV) H3N2 – which is similar in symptoms to the human flu but its own strain, first became a huge issue back in 2015 mostly in Chicago. The city went crazy trying to figure out where it came from and how to combat this epidemic.

It’s raised its ugly head again, this time people pointing fingers at the world of dog showing. The fact is that dogs that had recently attended AKC conformation events in Perry, GA and Deland, FL in May 2017 have confirmed cases of the disease. A veterinarian, Richard Hawkes, DVM, of Morehead City, N.C., noticed that two of his black Russian terriers had come down with it after attending these shows. They were confirmed via diagnostic testing and eventually all 10 of his dogs came down with it. He ended up losing one of his terriers to this terror but admits that that particular dog had other health complications.

This epidemic has now developed political tentacles. The previous outbreak in Chicago was pinpointed to rescues as it became widespread throughout shelters. This newest outbreak is hitting the AKC dog show circuit, and it’s hitting it hard. People are canceling shows, professional handlers whose income depends on these shows are canceling on clients – for the very safety of their clients.

I live up in Massachusetts and attended an agility trial this past weekend. The flu talk was inevitable and the size of the participants was much smaller than those that had entered. One woman had just bred her dog so she didn’t want to attend and bring the virus home while others just avoided to play it safe.

Its a double edged sword, there is a vaccine available for 2 of the strains, H3N2 and H3N8 but it includes an aluminum adjuvant and your typical vaccine risk. We all know that while vaccines certainly prove helpful, they are not full proof – or your dog could have already been exposed by the time you go to get them vaccinated.

It presents itself initially as kennel cough but the dog takes a turn for the worse. Here is the AVMA’s description of clinical signs:

The majority of infected dogs exhibit the mild form of canine influenza. In the mild form, the most common clinical sign is a cough that persists for 10 to 21 days despite treatment with antibiotics and cough suppressants. Affected dogs may have a soft, moist cough or a dry cough similar to that induced by kennel cough. Nasal and/or ocular discharge, sneezing, lethargy and anorexia may also be observed. Many dogs develop a purulent nasal discharge and fever (104-105o​F). The nasal discharge is usually caused by secondary bacterial infections, including Pasteurella multocida and mycoplasma species.

Some dogs are more severely affected with clinical signs of pneumonia, such as a high-grade fever (104°F to 106°F) and increased respiratory rate and effort. Thoracic radiography (chest x-rays) may reveal consolidation of lung lobes.”

To Vaccinate or Not

Just do your research, there are pros and cons to every side. Speak with your veterinarian about what your dog’s risks of exposure are. Read medical journals or information provided by the AVMA about the disease. Don’t get caught up in the politics and at the end of the day, its all about your dog’s health and well-being. Oh – and cats can get it too.

To help you better recognize the signs of an ill dog, familiarize yourself with canine first aid, take our class and of course – feel free to share your opinions in the comments below. We welcome an open discussion about a disease that is present and a problem – what are you doing about it?