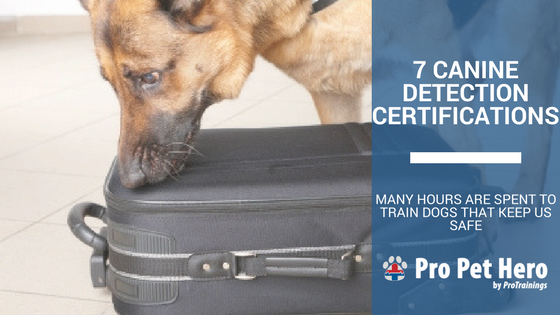 I always knew there were drug, cadaver and explosive detection dogs, many of these brought to the forefront during the tragedy of 9/11. I had also recently heard about bug detection dogs, especially with the rise of bed bug infestations but I just learned about agricultural disease detection canines. They are trained to sniff out specific deceases that could be coming in on products or plants from other countries.

The level of protection these dogs are providing and the amazing job their sniffers are doing is commendable. Behind every dog is a devoted handler and while the dogs do the majority of the work, their devoted handlers put them through the paces, train them daily to search and most importantly – teach the dog what to search for.

Here is a list of the top 7 detection dog certifications (in no particular order) that take an insurmountable amount of training and dedication. For those of you that have gone through the training or are considering doing so, we’d love to hear from you. Feel free to contact us in the comments section below or in our submit your stories section.

Accelerants such as gasoline, lighter fluid, etc. that may have been used to start a fire, leave behind minute traces of scent that accelerant detection canines are trained to sniff out. Each dog works and lives with their handler, a law enforcement officer or firefighter trained to investigate fire scenes. The canine and handler are required to complete 200 hours of training.

In order to have your dog certified according to the US Fire Administration and FEMA:

“A dog and handler are involved, either through proficiency testing or working a scene, in over a hundred trials per day. Detailed training records must be kept, and the records are critical in the courtroom. In addition to daily training, the ADC (Accelerant Detection Canine) is certified annually. There are several certifying agencies, including:

I would assume it best to quit your day job and enter this line of work full time.

The threat of explosives is even greater these days but it is also ever changing. While there are many chemicals that can act as accelerants to fires, there are plenty more non suspecting elements that when assembled in the right combination – create deadly explosives.

Just as with arson or accelerant detecting dogs, there are variety or organizations from which handler teams can earn certification. The Department of Justice (which the ATF is part of) has a National Odor Recognition Test which is administered annually and has a proficiency standard that is recognized by Congress to aid in reducing violent crime, prevent terrorism, and protecting our nation.

The Bureau of Alcohol, Tobacco, Firearms and Explosives also – as mentioned above – has a certification program that follows the testing set forth by the DOJ, they work closely together to bring safety to our country.

Drug sniffing, or narcotic detection dogs have various certification protocols as the canines mentioned above. As with explosives, drug detecting K9 units have to stay up-to-date with the ever changing illicit drug market. They also, as with explosives, must remain safe. I wrote an article about the dangers K9 units can face when performing searches. Dogs have been known to overdose themselves when the very drugs they are their to find, finds its way into their system.

The citrus industry in particular is highly susceptible to disease transmission. We import a lot of fruit and fruit plants so it is important to make certain that we are not importing a disease that could ultimately wipe out our own citrus crops. Coast to Coast K9 teams is a company that, “through an exclusive, cooperative relationship with the United States Department of Agriculture – Animal and Plant Health Inspection Service (USDA-APHIS), Coast to Coast K9 Teams has trained and deployed citrus disease detection dogs that identify early-phase citrus canker and Huanglongbing (citrus HLB).”

The certification protocol is specific to this organization and their direct work with the US department of agriculture. While certainly there is an immense amount of training and work that goes into this specific type of detection, it definitely is one of the more safer sniffing certifications out there.

Not the kind the CIA places but the actual creepy crawlies. The two most common types of bug search certifications are for bed bugs and termites. Several pest control companies got together to create the National Entomology Scent Detection Canine Association. They have certified several facilities around the country to be able to teach and certify handler teams to perform the job of finding the pests. This is a fantastic and organic way for people to have their homes searched for the hiding squatters. The mission of the NESDCA is, “Providing Entomology Scent Detection Canine Teams with an evaluation process to maintain the highest quality standards. Improving the image of Entomology Scent-Detecting Canine Teams. Educating Consumers about the benefits of Using Properly Trained Entomology Scent Detecting Dog Teams in the process of locating, and eradicating pest problems. Contributing to and Participating in Entomology Related Research.”

Many years ago a home owners insurance company asked the question that if dogs could sniff out explosives, drugs and people, why couldn’t they find mold? Home owners insurance claims for mold are tricky to deal with because first you have to show that the house has mold. Shortly after a panel of experts (microbiologists and veterinarians) was assembled and for more than two years of study, this panel concluded that dogs could, in fact, be trained to sniff out over 18 specific species of the most common “toxic” molds. Dog handling teams can find this certification at the Florida Canine Academy. Bill Whitstine, creator of the Mold Dog is a master certified instructor.

These canine handler teams were the front lines of the 9/11 aftermath. They worked around the clock tirelessly to find survivors and even bodies so people could have closure. Search and rescue dogs can range in the various tasks and training they receive. Some will be trained to search for survivors of avalanches, natural disasters while others may be trained to track a trail of a missing person or suspect on the lamb. There are still others specifically trained just in cadaver searches. There is a wide range of this category and almost just as wide of a range of certifications.

Never underestimate the power of a canine’s nose. In my Unusual Dog Jobs post, we already saw that dogs could smell emotions, sniff out cancer and find explosives after being dropped from an airplane. While these dogs can perform amazing jobs, we should never forget the amazing humans beside them that held the leash to lead the way for these canines to make our lives safer.

Here is a quick glimpse into the early stages of training a scent detection dog. This is my dog (and husband) in a nosework class.