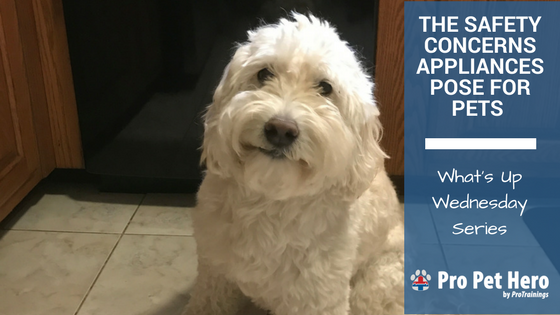 When I was probably about seven or eight my mother drove me to her friend’s house that had recently been destroyed by a fire. I was amazed at how the house had been leveled, the smell of burnt plastic still in the air and their belongings, ruined and strewn about by the raging fire and firefighters who fought the blaze. Thankfully everyone got out safely, including the two dogs.

On a seemingly normal Friday night the family had headed out for dinner and a movie. The dishwasher had been packed and set to run. How perfect that we can set appliances to do their job while we are out enjoying life?

That Is Until They Fail.

Fast forward many many years – Ok, 30 to be exact and the same problem occurred, only this time the house was spared, thanks to the care scheduled for the dogs.

My husband and I own a dog walking company where he visits pups along with several other staff members. One Wednesday like any other he entered into a Jack and Cutter’s house, two charismatic Chocolate Labs to find them panicked and the acrid smell of burning plastic. He leashed up the pups and placed them in his car, then headed back into the house to find the origin of the burning stink.

He found black smoke billowing from the dishwasher, you wouldn’t think something that uses water inside of it could catch fire but the electrical panel did just that.

The smoke alarms began and he quickly ran downstairs to turn off the electric for that area of the house. He hung around for few minutes to make certain the smoking stopped and determined there was no power going to the machine so the threat had ended.

A phone call to the client ensued and he opened all of the windows in the house to get the smell out so the dogs could be returned to a safe, less stinky home.

That was lucky, for this dog and many like them the luck just wasn’t there.

This is not an unusual occurrence. It is extremely common for us to put a load of laundry in or set the dishwasher to run then we dash out the door to start our busy day. Or as our family friend’s had done, enjoy a wonderful dinner.

According to The Consumer Product Safety Commission, using estimates from 2006 through 2008, (sorry could not find anything more recent without digging through tons of safety reports on specific appliances) says that “major appliances caused more than 150,000 residential fires each year, resulting in 3,670 injuries, 150 deaths, and $547 million dollars in property damage.”

Anything electrical can and will malfunction but you certainly do not want it to happen when you are not home and your pets are trapped. Had my husband not been scheduled for a midday dog walk, these two Labs could have suffered from smoke inhalation or worse, been burned in a house fire. This is one of the millions of ways house fires can happen.

Think Before You Leave

Before you set-it-and-forget-it, think about who is home. You might be taking the dogs for a walk while the dryer goes but your cat is trapped and your lint trap is a spark away from igniting.

It’s a rule in my house and I hope it becomes one in yours. If your pets are at home and you are not, no appliances should be running. Yes it takes a little thinking on your end to schedule things and yes it’s less convenient than coming home to clean dishes but I’d much rather have living pets.

Turns out the client’s particular model of dishwasher had a recall.

Do you have a story about an appliance gone awry?