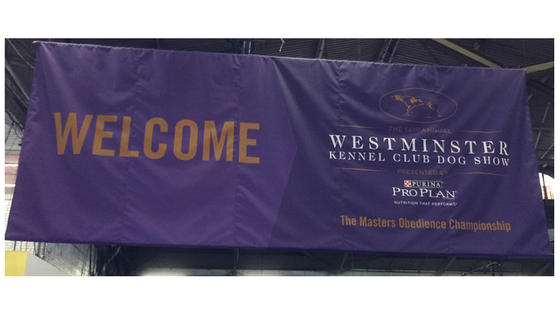 Once again good fortune would strike and I had an invite to the Westminster Master Agility competition this past weekend. I was asked to come along as an assistant to Jack Daniel – the Super Bowl Commercial Dog. Some may think it’s silly to have an assistant for a dog but if I could ever convey the amount of shear work that goes into trialing a dog, ESPECIALLY at the most prestigious trial of the year, people would truly understand.

Jack lives in Vermont so the drive alone to NYC is a good 4 hours. We met up in Newburgh, NY and headed in at 4:30 am Saturday. The parking garage for Pier 94 opened at 5 am, we figured 6 am would be a good arrival; it was packed by then.

Wheelie bags, bedding, crate (had to actually go back for it and retrieve it from the roof of the Mini Cooper), dog and so many more items were lugged down the long parking deck. We stood in line on a chilly wet New York City morning, admiring the buildings through vision barely clear but better thanks to coffee. The elevator takes FOREVER!

The doors opened and a slew of people exited all certainly making second or third trips back to their car. The anticipation was heavy, the anxiety strong. The elevator while massive, was packed with pups, their people and even some cats. We were headed towards Pier 94 where the Meet & Compete was happening. Westminster Kennel Club’s meet the breeds including cats, and the master agility competition. Only those dogs that had made it to the master level of agility could compete – this was the best of the best.

We arrived and found that the bench spot reserved for Jack had been mistakenly filled. Luggage in hand it was a chaotic few minutes to find a spot that was open and near our friends we had reserved. The organizer was carrying sheets and sheets of paper with lists of hundreds of dogs on it, moving people around as needed, there was a line just to get to her. One other Boxer and our Boxer-owner friend were next to us in our yellow bench area. Our friend Allison who despite owning 2 Boxers was there running her mother’s 4 yr old Springer Spaniel whom she had taken on as hers when her mother passed so suddenly a few years prior.

We got Jack settled and then it’s on to get course maps, walk the course, figure out the running order and squeeze in some time to visit Meet the Breeds. I stopped by to say “hi” to fellow Boxer owners who were setting up for meet the breeds and sure enough was called to action. Sparkly drapes, heart decor, table cloths and feathered boas; we were setting up the Boxer Love Shack. Last year at Meet the Breeds the Boxer won for the best booth – the club members were trying hard again this year. Boxers are known to be kissers so this aspect of the breed was highlighted with the love shack booth and let me tell you there were lines!

Lines were everywhere, the massive pier area was packed. There was an entire additional floor of Meet the Breeds I couldn’t even get to because the line to get in was humongous! I didn’t want to risk missing Nina and Jack Daniel’s run, but alas – I did!

After being up since 3:30 am and it now being 10:45 am I stopped to rest on an open spot on some couches that had been set up in front of the finalist trophy. I called my husband to try and explain how crazy the setting was and in doing so, missed Jack Daniel’s run. I couldn’t see over the crowd and couldn’t hear over the noise. The main reason I was there besides helping to sling stuff was to watch team Daniel, my friends. The course was crazy challenging with a jump to a weave pole entry that caused so many to not qualify including our other Boxer friend Sparkle. Nina and Jack nailed it and placed 4th in their class. I only had one more chance to watch them and that was for their standard run later in the afternoon.

As the crowd swelled I felt compelled to help my other Boxer crew drowning in a sea of people at the Meet the Breeds. Probably out of guilt for missing Nina and Jack’s run, I wanted to help! There were literally shoulder to shoulder crowds. My one fellow Boxer fancier was starving, she had taken a train up from Virginia so I went to relieve her from holding Gloria, the 7 mo old Boxer puppy who took on the roll of lead kisser with all her might. She had strangers pouring over her and she was amazing! Children were hanging off her neck and yet she tilted her head for pictures, kissed strangers that stuck their face in hers and was an unbelievable representation of the breed. Several other Boxers did the same; Rooney, standing for hours with strangers hugging him and taking pictures. An overwhelming nightmare for most dogs but these Boxers took it in stride – they did their job. This is not normal or recommended, only the most crowd-proofed dogs should attend these functions. The stress is as high as can be and the humans around them need to recognize and protect these dogs. Every breed had at least one dog representing, it truly was a fantastic sight.

I helped for a couple of hours but knew I needed to head back to help and watch Jack run. Finding people in the ginormous crowd was not easy. After seeing Facebook the next day, I realized there were so many people there that I knew that I didn’t even see; a crowd of thousands.

I was able to track down Nina and figured out she and Jack were about to run. The challenge next was to find a place to sit, let alone stand – both had become nearly impossible. Its during lunch and it feels like the population of New York City has descended upon Pier 94. I find a hole in the shoulders and push my way through, I’m barely 5 ft tall and I needed to see the ring.

I caught a few other runs that were the same course I missed of Nina’s. Below is a run from my friend Allison and her dog Bodee, Speedway’s Bodacious Babe. They would not only double qualify or as we say, receive double Q’s, they would go onto the finals and take 3rd in their class.

I also was able to watch one of my trainers and her Golden Zer, competing in the Standard run. Grace and her other Golden Punk would go on to win second in their class in the finals.

While I was ringside to watch all of Nina and Jack’s final run for the day which was their standard run, my phone was acting up and of course I only caught 2/3rds of the run. So for those of you that admired Jack Daniel hanging out with Tom Brady in his Super Bowl commercial, here is what the real Jack Daniel does when he’s not acting with football superstars!

The day’s amazement continued. Jack ended up double q’ing, so we headed over to the Meet the Breeds Boxer booth to celebrate. He’s posing here with his wins and in front of the banner featuring a picture of him from a Seresto commercial shoot. The poster read, “Boxers can do everything” and Jack just proved his point.

We also took some time to checkout other meet the breed booths as well as this fascinating display made entirely of flowers!!! The sights were incredible, the crowds were staggering and the day was beyond amazing.

After our last walk through for meet the breeds it was time to prep for the finals. Many people had left so we thought it would leave us space to get a seat and watch the final televised show. We were wrong. At 5pm the line started to build. More people were coming back to watch the big event. The line went from the back of the long pier all the way out the door, and we had to get in it if we wanted to watch.

We made it in and grabbed some seats to watch many of our friends and all of the finalists compete for the chance to be first in their height division and fastest of them all. My favorite run was that of a Pug friend of ours, Miss Mabeline. I know the Beagle Mia received a lot of attention for her cute but distracted run, but Mabeline ran her heart out and did it so well.

We stayed until 9:30 pm, watching the finalist and the final winners. A man I have seen at many trials named John Nys won the championship with his Border Collie Trick, and despite seeing them run countless times at trials, seeing it under the big lights was entirely different.

The exhaustion set in and the day finally came to an end. Seeing all of the amazing dog teams made my heart smile, seeing the massive crowds made me tense. I plan to attend next year with my little Boxer. We are one leg away in each of the classes from entering Masters. We have a long way to go in our training and our relationship, but like Jack and his owner Nina, I look forward to developing into a team that shows the world – we can do anything.

Enjoy some other photos I took of the event. I encourage everyone who shares their life with a dog or are thinking of doing so to checkout agility. You don’t have to attend Westminster to get an idea of how strong it helps in developing the bond with your pup and just bottom line, how much fun it can be.

I’m off to go watch the conformation evening 2 of the Westminster Dog Show. I’ll be rooting for the Boxer Devlin as she steps on stage with her talented handler Diego and gets the light shown brightly upon her beauty. All the dogs entered are stunning, may the best one win!

And remember, when you share your life with a dog or cat, its your duty and their right to be safe in your care. Learn how to save them or when at an event such as a dog show or agility trial, you will have the skills to help save a pet having an emergency – get certified in pet first aid and CPR NOW!