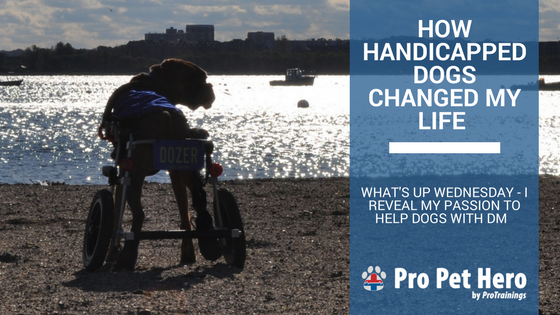 Many of us have had “that dog”, I’ve had two. I thought about going on Facebook Live about this topic but I can’t without crying so my written words will have to suffice.

My dog Tank at one of many rescue events. He had a T-shirt designed for Dozer and Clancy that read, “this is how I roll”. Tank loved meeting everyone in his cart

The Start of DM

On a hot summer day seemingly like any other day I had brought my 6.5 yr old Boxer dog Dozer on a walk with a client’s Great Dane. They were buddies and enjoyed the nearly hour long stroll around the neighborhood. As I had done many times, I placed my pup back in the locked and running car with AC to go put the Dane client back in his house. When I came back to my car I looked back to see Dozer as I always did, only I saw the back of my Honda Element was covered in blood!

I jump into the back of my car and began looking for the origin of the massacre. Doesn’t take me long to see it’s one of his back feet. Ok, there must be glass or something that has cut his toe right? Wrong, his two middle toenails are worn down to the quick – the blood supply to his nail has been exposed, why?

My husband and I had noticed a slight limp and had brought him into the vet. A large German Shepard had landed on him a few days back and we thought he might have hurt his knee. The vet noticed the limp as well but no swelling and told us to watch it.

I patched my boy’s toes up and went home to hit the Internet, to my horror I found a Boxer with the very same symptoms and a prognosis of Degenerative Myelopathy – basically ALS for dogs. He had been dragging his toes, unable to right them fast enough for his next step. I had been wrong before about the Internet diagnosing my dog so off to the vet we went.

My vet couldn’t diagnose him so we were sent to a neurologist. The neurologist suspected either a tumor on or near his spine, or degenerative myelopathy – which could only be diagnosed upon death by doing a necropsy of Dozer’s body, particularly his spine.

We had 2 choices, MRI or a bottle of steroids. Steroids would shrink any existing tumors thus relieving symptoms, unless there was no tumor then a genetic test could tell us if he likely had the two required copies of the genes to express the disease. The steroids did nothing and the genetic test came back revealing he indeed had the two copies. My husband and I were hit with absolute despair.

At the time information was limited on the Internet but we used every study and ounce of information we could find to alter our lives to make his as best as possible. We got him measured for a wheelchair and treated each day more precious than the last. As he entered the stages of needing the cart we scoured the Internet more and found some helpful videos on YouTube. A couple going through the same thing as us had engineered “robo boots”.

When a dog first needs the wheelchair they can sort of pull their back feet forward. They have too much strength to be put in the stirrups which leads them to step up and out of the wheelchair but often not enough to right the foot for stepping, in comes robo boots!

So we found this couple who had attached bungee cords to boots that were attached to the cart which pulled the weak back feet forward. Here is a view of what walking in the cart is like without the bungee cords. It was this finding, and ultimately later this and many more relationships that would catapult my life from despair to the passionate path on which it remains.

We reached out to MaryBeth and her husband who designed the boots, found out they were only an hour and half drive from us and we set a date to bring our wheelie dogs together.

As I look back I know I shed a million tears but my heart is warmed by the extra attention we spent on Dozer and the amazing people we met through the journeys with both Tank and Dozer. My heart breaks knowing that at the young age of eight, we decided that DM had claimed his dignity and it was time to go. Left with his biological father Tank, we absolutely dreaded doing the genetic test.

Tank teasing Dozer with the ball, the cart barely slowed Dozer down, he would get it back eventually

The Mission to Eradicate

Tank had been bred to produce Dozer well before the genes had been found, let alone the test for it. Now that we were armed with a way to prevent the disease and ultimately another dog with whom to travel through it – I vowed to eradicate it.

That became its own excruciating challenge. I was not a breeder by any stretch, I was a pet dog owner who simply loved the Boxer breed. I had done my due diligence to avoid the known heart issues with Tank and Dozer and lead a healthy unprocessed lifestyle to avoid cancer, but DM just punched me in the heart. It twisted it into a ball and gave me such immense pain. Dogs with heart issues tend to drop dead, cancer is cruel and painful but the decision is clearer to make – the dog is in unmanageable pain, put them down. DM keeps their mind sharp as a tack while their body fails around them. It’s confusing, it’s embarrassing (for the dog) and it’s disheartening.

So I started my adventure. I had already been taking Dozer to rescue events, walks in very public places and telling anyone that so much as had a questionable look on their face all about DM. Many people were cruel and told me I was evil and should put my dog down while others would give me thumbs up or hugs. Everyone had their opinion about what I was doing to my dog so I felt it best to educate anyone on what exactly was happening.

You can imagine that in Boxer specific rescues, for which I volunteer, there are several dogs a year that are plagued with DM. It’s a rampant disease because even after the genes responsible were found, breeders saw it as a later in life issue, that heart and cancer garnered more attention because they can take a dog at three. Or since so many didn’t know about it, no one was testing for it. Also since we didn’t know what made it express since not all dogs with the genes got it, then it wasn’t worth considering. I have heard all of the excuses, we’ll ‘bottleneck” the breed if we try to breed only clear dogs, the list goes on. I disagreed so vehemently, they all MATTERED, all diseases affecting dogs mattered! Why not try to produce dogs that didn’t have heart issues, were less susceptible to cancer and would NEVER produce DM? I was told that was impossible, so here I am, trying my heart out. I have 3 dogs in my house, genetically clear of DM, their hearts have been tested and all I can do is hope about cancer and any other underlying, unknown genetic diseases. It was the people who made this so hard to try to fix, not the dogs.

In the beginning I was blown off as a novice, I didn’t know what I was talking about. Those that had been breeding for 40-50 years said I was naive. Of course I was but I was passionate and determined that eventually no dogs or humans should experience DM, so I started breeding and showing Boxers. Not in a million years would I have thought this would be my life’s path.

This Isn’t Just in Boxers – So Many Breeds Are Prone

Then there were all the people with the dogs that had DM. This wasn’t just Boxers, I had friends with Corgi’s, Pugs, Rhodesians, Aussies, Labs, Chesapeake Bay Retrievers, Golden Retrievers, YOU NAME IT! Degenerative Myelopathy was everywhere, so I vowed to help.

My boys’ cart which I paid over $600 has been altered, cleaned, tuned up and lent out to over 6 dogs just in my area. It’s currently helping a blind and deaf Australian Shepard get her dignity back from DM’s nasty grip.

If you have a dog with DM there are so many more support groups now than when we initially went through it, one having over 7,000 people in it. I will drop everything to help someone who has a dog with it. DM made me angry but it carved a path of possibility.

Because of DM I became passionate about 1st aid care for our pets. Dozer would drag his rear legs everywhere and get injured. We learned to recognize, prevent and treat issues with him and all of our clients dogs better because of this nasty disease. I learned quickly that my dog only had us, while veterinarians were helpful in figuring out what was happening, they didn’t know what to expect, how to help owners cope and what to actually do for the dogs.

DM dogs can do normal things like walk with friends

Support DM Dogs and Their People

Thanks to Eddie’s Wheels, My Dog Has DM and our dear friend MaryBeth, DM became a lifestyle with which we learned to cope. Support got us through and now there is so much more of it since so many more dogs have it.

If you have a dog with DM reach out for help, if you’re interested in learning and preventing it, reach out. If you see a dog in a wheelchair, smile and please give a thumbs up. No one thought to put grandma down when she couldn’t walk anymore.

Clancy was our Superman – MaryBeth’s dog with DM