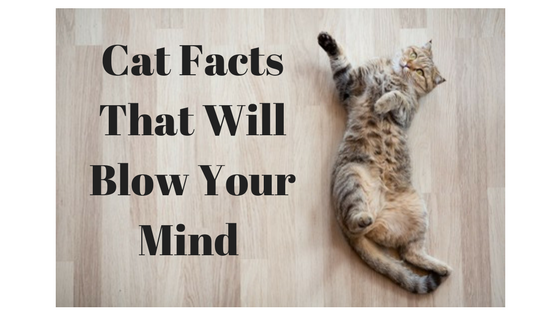 Most cats are lactose intolerant so after they wean off their mother’s milk, they stop being able to breakdown dairy products. Giving your cats a bowl of milk is probably going to give them a stomach ache and is best avoided.

During the Spanish inquisition,  Pope Innocent VIII condemned cats as evil and encouraged people to burn them. As a result thousands of cats were burned. The result of the mass cat killings led the rat population to explode and thus fueled the spread of the Black Plague or Black Death. The black plague epidemic swept through Europe from 1348 through 1351, killing an estimated 50 million people, which has been said to be as high as 2/3 of the European population.

Two Siamese cats helped to find microphones hidden inside the Holland embassy in Moscow. These cats kept scratching and meowing at a certain spot on the wall and the employees of the embassy thought there’s probably a mouse in the wall so they investigated only to find hidden Russian microphones. The cats were able to hear when the microphones turn on because they can hear the frequency much higher than humans can.

Some scientists believe that cats are able to follow the magnetic field acting like a compass allowing them to find their way home even from far distances such as 200 miles.

Similar to humans, cats have dominant sides. Females typically are right ruling whereas males are usually left ruling which is kind of interesting because only about 10% of humans are left handed and a majority of those are males.

There is an incredibly expensive coffee in the world called “Kopi Luwak”. It costs so much because of a particular process it goes through. In Indonesia, there is a big cat called the Luwak that likes to eat coffee berries. These cats can’t digest the beans so they pass through the digestive track of the cat until they poop them out. People then collect the pooped-out beans to make coffee. This coffee must be pretty amazing considering that it sells for about $500 per pound!

Egyptians, especially in ancient times loved cats so much that when a cat died they would mummify them, bury them with a mummified mice and then threw a party to celebrate. At the party they would shave off their eyebrows and mourn the loss of their cat until their eyebrows grew back.

Creme Puff from Austin, TX still holds the record for the oldest cat. He lived to be 38 and 3 days. The average lifespan of a cat is 15 years although that depends on a lot of variables — from diet and exercise to their overall health or their breed.

From the oldest to the wealthiest, Tommaso, the world’s richest cat earned his millions after his owner Maria Assunta died. The widow of a real estate tycoon left her once homeless cat $13 million to be exact; talk about rags-to-riches!

We will end with the most powerful cat. In Talkeetna, Alaska since July 18th 1997, Mayor Stubbs has been in office and governs 900 people. That’s right, Mayor Stubbs is a cat.

Do you love your cat, learn to be there hero today. Even if they aren’t the Mayor of a town in Alaska, they might be the Mayor of your heart. Learn to save them now.