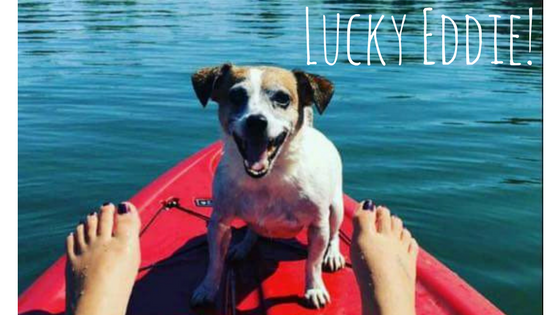 Expect the Unexpected – a True Story from a Guest Author

“All eyes were on me, as I stared at the body of the lifeless dog. His tongue was blue and eyes unresponsive. I knew exactly what to do, I don’t know how but I did, and then I jumped into action.”

I Didn’t Start my Day Expecting This

When I left the house that morning, I was not thinking I would be in an emergency situation. It was a hot Saturday afternoon in July. My friends and I were invited to a small lake in Alto, Michigan for a BBQ. The day was full of activities; we swam in the lake, played volleyball, and played a game with a Frisbee called “Can Jam”. The owners of the house we were at had a dog, a tiny Jack Russell Chihuahua mix, named Eddie. He had a lot of energy for a dog, and a very obsessive personality when it came to playing fetch. We all started to throw a tennis ball around for him. As the hours went by he continued to bring his tennis ball to us, drop it at our feet and bark nonstop until the ball was thrown again. There were about 15 people at this BBQ and I am sure he brought his ball to each and every one of us.

All of the sudden, things got quiet and the air felt eerie. Eddie hadn’t barked for awhile. We all agreed it was strange he wasn’t barking at us to throw his ball, and so his owner started to look for him. After this, my memory starts to get blurry, everything in the next few moments happened so fast. Eddie was spotted not too far from the dock, unconscious and floating in the lake.

My Training Taught Me to Be Prepared for the Unexpected

His owner ran into the lake to retrieve him and laid the lifeless dog’s body on the dock. The owner started stroking him softly, and pleading,“Eddie! HEY!” No response. The dog’s eyes were wide open and lifeless, his tongue blue and cold. Eddie lay there on his side for a few moments and did not move. I have been CPR certified for a large portion of my life, and was a swim coach for five years. In college I also took some Athletic training courses, where I had studied emergency action plans and survival success rates. I was taught to be prepared for the unexpected. I had hours of practice on human mannequins, but I have never done CPR on a dog before. At that moment of panic, my training instincts took over. I shoved Eddie’s owner out of the way. All eyes were on me as I hovered over the body of the lifeless dog. His tongue was blue and eyes unresponsive. I knew exactly what to do in this situation, I don’t know how, but I did. Then I quickly jumped into action.

I closed the dog’s mouth with my hand and began rescue breaths. I noticed they weren’t going into his chest, so I readjusted and tried again. After I readjusted, the breaths still weren’t going in. Then I took both of my hands and begin compressions on the little dog’s chest, like I would on a human to circulate what ever oxygenated blood he had left to his vital organs. I remember counting the compressions in my head, “27, 28, 29, 30, breath, breath”. The dog still lay on the ground, unconscious. Knowing he was on the brink of death, I took my first two fingers, opened his mouth, and reached into the back of his throat in an attempt to clear his airway. Eddie then vomited. I continued the series of compressions with rescue breaths, “breath, breath, compressions “27, 28, 29, 30”. I stuck my fingers down his tiny throat a second time, which caused him to vomit again. I then picked Eddie up and provided back blows which caused him to regain consciousness and start wheezing. The poor little dog was exhausted from nearly drowning and laid quietly on the dock, his breathing was labored, but he was alive! Eddie’s owners rejoiced and quickly rushed him to the Veterinary ER.

Leaving the house that morning, I had no idea I would be in a situation where I would have to save a life. I am so glad I was able to use the training that I have been taught and was able to jump into action. I have always had a passion for helping others and I hope I can continue to help in my life. I have plans to get certified in Pet CPR, and to be a certified CPR/AED instructor. I believe everyone should take the time to get CPR certified, and carry the confidence of being trained with them daily. You never know when you will be in a situation where you alone can save a life.

A True Story
By Grace Regan

Grace Regan is a health advocate and adventure enthusiast. She is known to inspire and motivate those closest to her. She graduated from Western Michigan University with a Bachelor’s of Science, Exercise Science. She spends most of her time cooking and exercising. Grace is always looking for new challenges and is currently preparing to take the GRE exam for graduate school. She is known to face life’s endeavors head on.