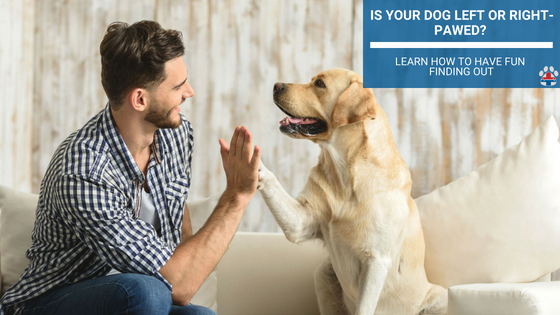 Most of us know that humans generally tend to be left-handed or right-handed. In fact, many studies show that up to 90% of us are righties.

I knew dogs had a tendency to be left or right-pawed but it got me thinking, are lefties less popular as with humans? And how in the heck could you really tell what paw your pooch prefers to use?

However, there seems to be less of a rarity in sides – dogs do not tend to be more left-pawed or right AND they can be ambilateral, which in humans we would refer to as ambidextrous – meaning they can equally use both hands, obviously paws for dogs.

So dogs generally do have a preferred side, it’s harder to guess if they will be a righty or a lefty and keep in mind, they could be equal with both.

Which Does Your Dog Use More?

There are several tests you can conduct to help decipher which pretty paw your pup wants to put up for a high 5.

The First Stepping Test  This test measures from a lateral stance, which paw your dog first takes a step with when it starts to walk away from the standing position. The most commonly used one wins.

The Kong Test – This test uses the rubber Kong toy to determine which paw your pup prefers to use to hold it down to get the yumminess out from inside the toy. Count the number of times they use their left paw versus their right or even both, and the most popular one gives you the answer.

The Directional Dish Test – This test places bowls filled with food at a 45° angle to the dog. Whichever bowl they head to, is determined to be their preferred side.

You could also just do the high 5 test and see which paw they offer up, but that could get muddled with training. If you have already trained one side (my dogs know both) or you could inadvertently ask for the paw they do not prefer just with body language.

I don’t think about my dogs’ paw preference often but you can bet I’m going to over the next few days. I’m going to conduct some tests myself and am curious to see if they are righties, lefties or ambilaterals.