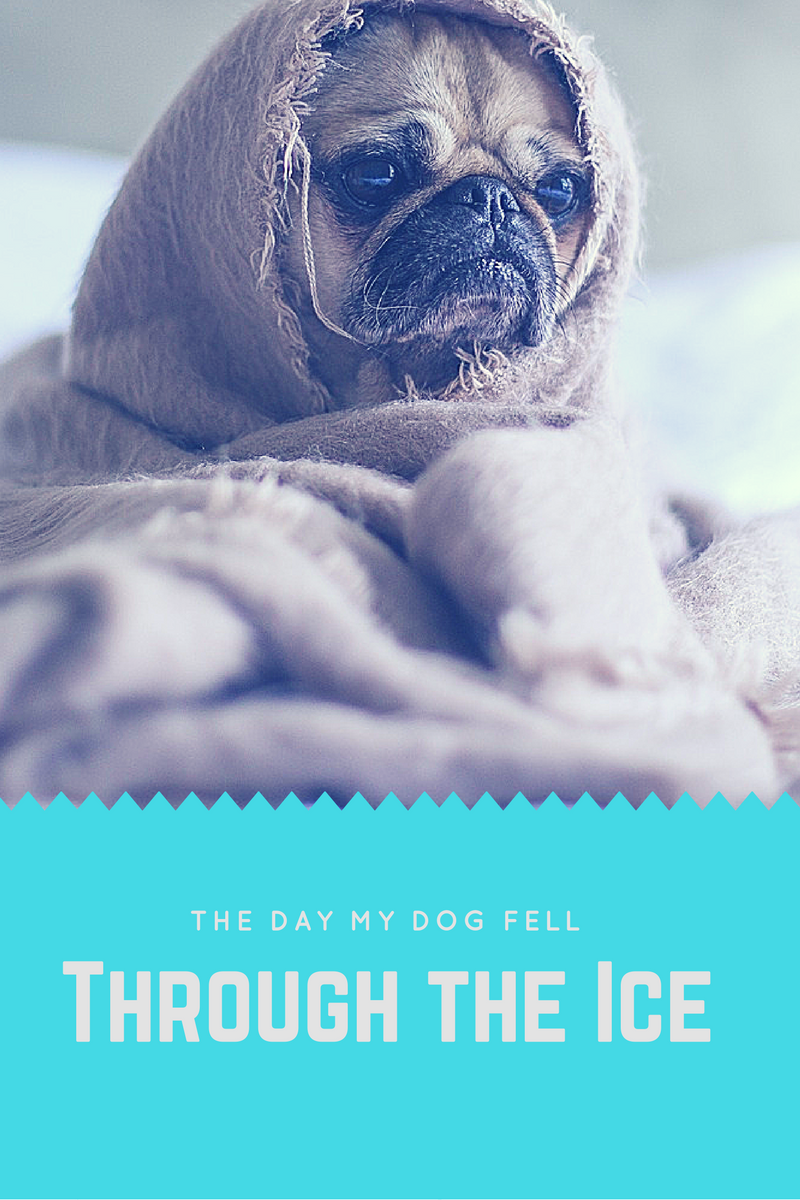 Walter, his mother Debbie and sister Phoenix (taken a few days before the frosty day)

What started off as a relaxing Christmas Day has turned into an adrenaline packed holiday and this all happened before noon! We just wanted to take the dogs for a nice long hike so we could come home and enjoy the rest of the day with sleepy pups. We achieved our goal of tired dogs.

We went for a hike along the trails of the Delaney Flood Control Site. There is a large pond, a massive flat floodplain and a wondering brook surrounded by wooded trails. Along the backside of the trails on a steep embankment is where Walter took a wrong turn. The trails headed up and Walter went down to investigate the babbling brook with ice on the bank.

View of the large pond with snow cover

My husband and I were walking side-by-side on the trail with our two other dogs, Walter’s mother Debbie, and his sister, Phoenix. I looked over my shoulder down the steep hill as Walter ran down, last I saw was him nearing the ice and I even said to him, “that’s not safe ice to step on buddy”. As I was finishing that sentence my husband took a hard turn left and started running down the icy snow-covered hillside and he yelled out, “Walter fell through the ice!” I immediately leashed his mother and crested the hill after Phoenix to see a sad sight – Walter’s lower body submerged in the water and his front feet clinging to the ice.

I grabbed Phoenix and yelled to my husband who was on the ice, “lie flat!” I felt the adrenaline kicking in and I had to force my brain to overpower it, I needed to think. My husband’s safety is first, then get Phoenix leashed before she headed over to see what was going on and then help coach my husband through Walter’s rescue as my finger is on my phone to call in the event that one accident becomes two.

The sheer amount of information my brain was processing in what was probably a minute was astonishing. I was consciously thinking through my adrenaline, as a pet emergency instructor I know how the hormone can overtake and while certainly helpful, it can be damaging to keeping you aware of safety. I knew my husband could suffer the same fate as Walter so I wanted him to lay flat to distribute his weight. I knew Phoenix could run after them but I only had one leash. As I was looping her mother’s leash through Phoenix’s collar I looked up again and caught eyes with Walter, he yelped out in fear or pain from the extreme cold – a sound that will take me awhile to forget. The fight against my adrenaline grew and my mamma-bear instincts were kicking in. I was thinking I could tie the girls to a nearby tree and use the remaining leashes for my husband as a rope to have him hold. My brain was checking the speed of the water, if Walter broke off the edge, where and how fast was he going to go down stream? Would he get pushed under the ice and drown? The depth looked to be only about 3-4 feet so I started to relax about my husband’s safety. I was about to tell him if he goes in, to just stand up!

With both female dogs on the embankment secured, my husband slid out cautiously to grab Walter, I was telling him to “grab his collar”, which he did and as Walter popped up, my husband started sliding closer to the edge! He cautiously made it back off and was able to catch Walter who’s puffy down coat was now a soggy weight, luckily slowing him down and making it easier for us to catch him.

We scrambled back up to the trail, removed Walter’s jacket and put his mother’s on him – time to get back to the car, a good 1/2 hour hike out.

Our walk back consisted of conversations about what we could have done better to avoid that, how we both saw that coming and how as the big picture goes – we got very lucky. He could have ventured out after a leaf onto the large, very deep pond and that would have been a very different outcome. While Walter did fall completely into the water as the ice gave way, he was able to rely on his instincts and crawl to the side, grip, and hold on. His cry could have been out of fear or pain but either way he allowed us to approach and help him. All in all no one is worse for the wear, we’re all a bit more tired, cold, but pleased with the outcome.

I realized my husband didn’t need my sideline coaching, his own abilities to overcome adrenaline, not panic and calmly save his little boy were impressive. The only regret I have is as a teacher, and sharer of safety – I didn’t video the event. It seemed foolish at the time but once I had the girls, my role was as a second responder should the incident not go as smoothly. Safety ALWAYS comes first and we can all still learn from the description of the incident.

How to Prevent Your Dog from Falling Through the Ice

In this circumstance, we needed to keep Walter under better control. I saw that ice was dangerous but wasn’t proactive, which left us in a state of being reactive. Part of being safe is always looking ahead, thinking of the accidents that can happen and preventing them. Knowing how to take action when they do happen is a good skill, but to me the more valuable skill is knowing how to prevent them.

I was aware from several search and rescues I have watched on icy ponds that it is best to distribute your weight by laying flat and sliding over to the victim. I knew to think of items – like leashes – that could be used as ropes and I knew once we got Walter out, his condition could worsen very easily. My husband could have been in the same boat given how wet he had gotten.

Be Prepared for the Weather

Walter’s aftercare was minimal. I knew to get the wet coat off and get a dry one on to keep as much of his core body temperature as warm as possible. We also had to keep moving to get back to the safety of the car, this helped keep him warm. We stopped every few feet to see how cold he was and there was quite a bit of shivering. Its thankfully in the high 30’s here today, had it been much colder and had we not had jackets for our short-coated Boxers, the whole incident could have been a lot worse.

Walter certainly had a mild case but nothing that can’t be treated with a warm blanket and a nap on the couch. We dried him thoroughly with towels in the car and brought him home to check his temperature, which was normal. He’s good to go and snuggled on the couch resting.

Here are the signs you want to look for should you dog or cat be exposed to extreme cold:

Remember, the old adage that says an ounce of prevention is worth a pound of cure. We should have kept Walter from even being able to go onto the ice BUT we knew what to do when he did and how to recognize signs of hypothermia. Don’t leave yourself unprepared for anything to happen to your dogs, accidents can and do happen, how they are handled makes all the different. Get certified to save them now so you know how to create a plan of action when something goes wrong.

P.S Yes this is the same Walter that was mentioned in the Chew Proof Guarantee blog post, he’s clearly in puppy adolescence!