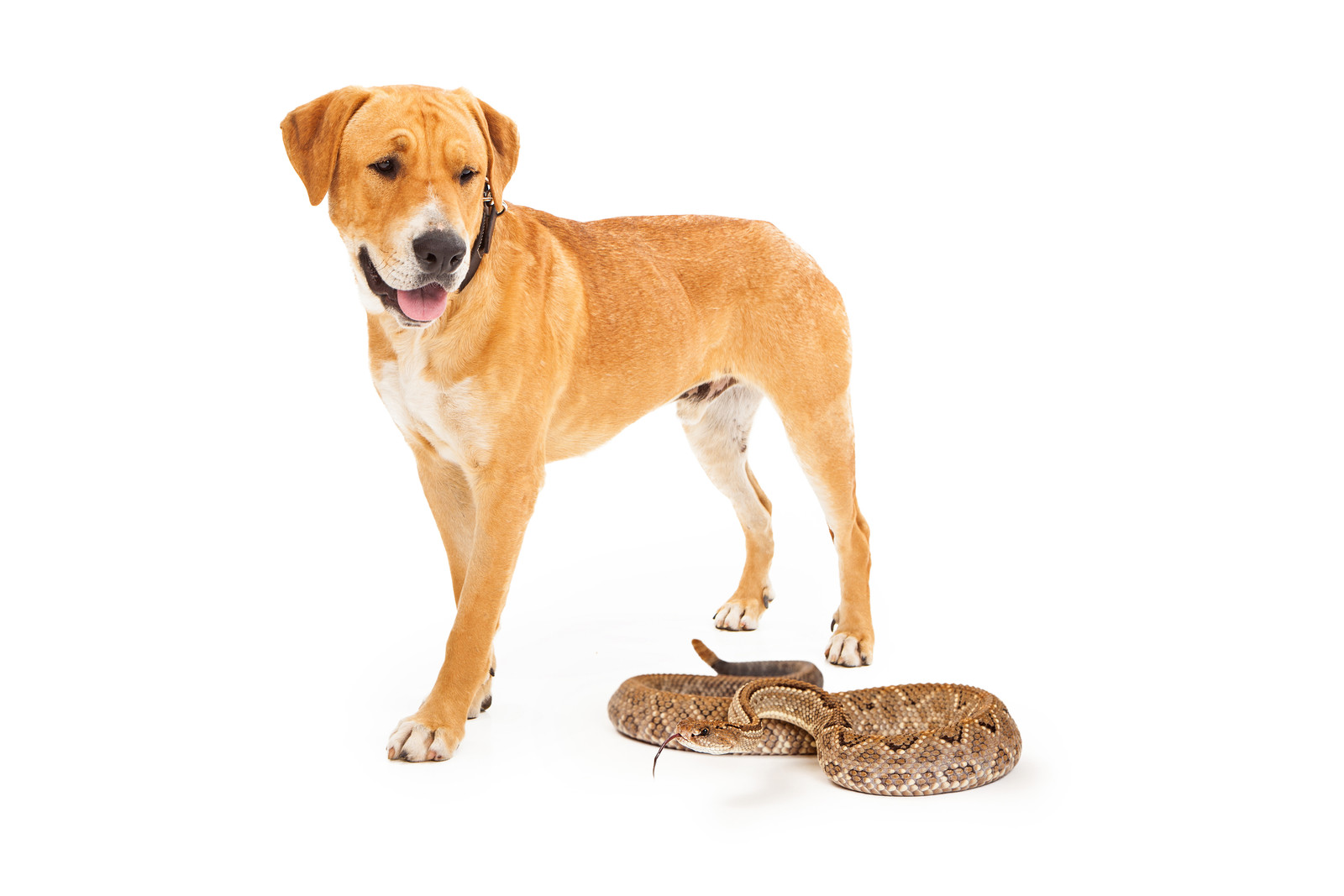 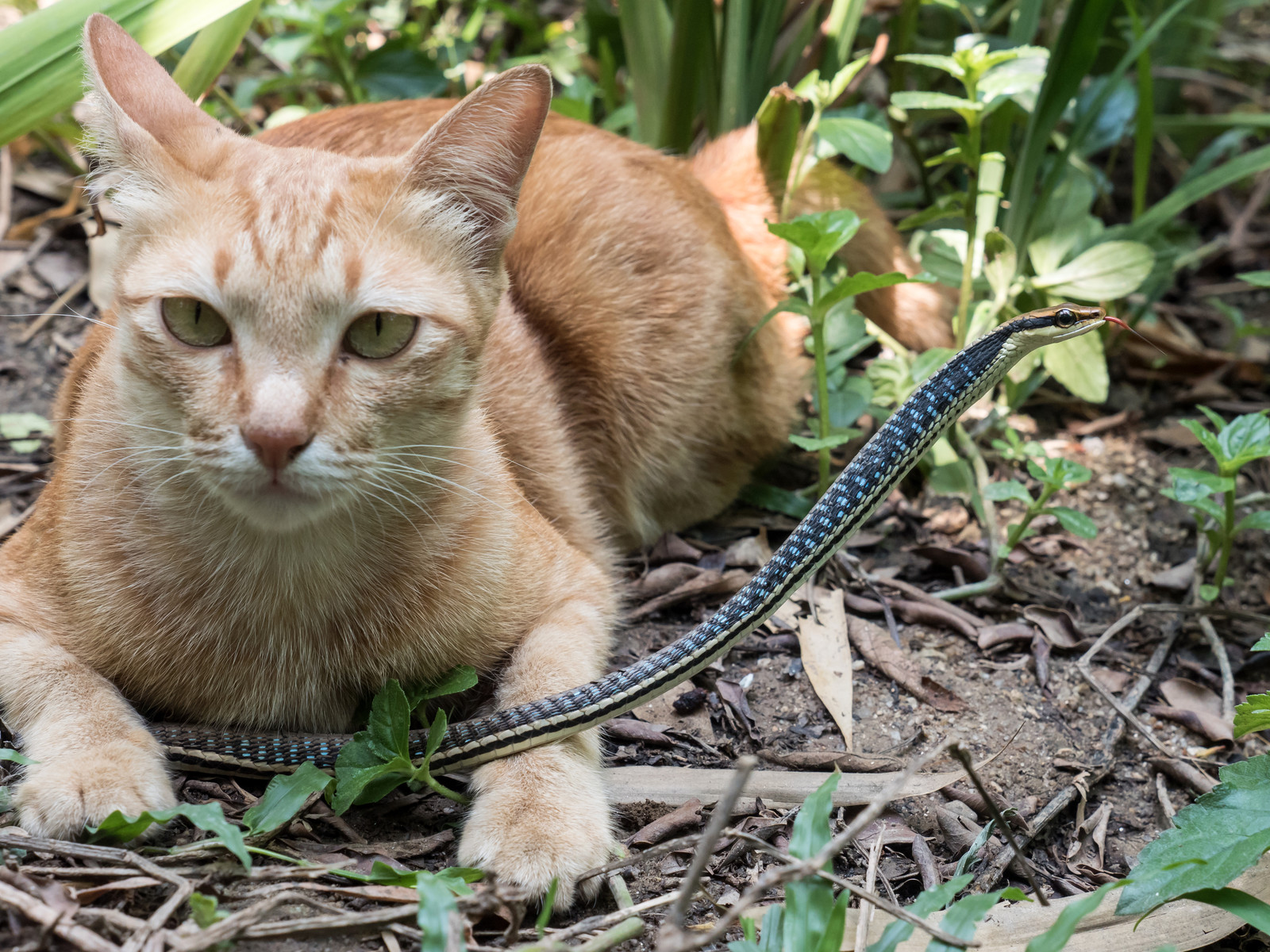 Confronting an irked rattlesnake or other venomous snake is definitely a situation any person, dog or cat wishes to avoid. But a new study indicates that cats are twice as likely to survive a venomous snake bite than dogs. In terms of size, most dogs are larger than most cats. However, a research team at the University of Queensland pinned down the reason cats survive venom from snakes on a condition called venom-induced consumptive coagulopathy. That’s a lengthy string of words to describe the condition when an animal loses his ability to clot blood and as a consequence, bleeds to death.

The Queensland team, led by associate professor Bryan Fry studied findings of venomous bites caused by the eastern brown snake in Australia. “While only 31 percent of dogs survive being bitten by an eastern brown snake without antivenom, cats are twice as likely to survive – at 66 percent,” Dr. Fry reported to Science Daily.

The researched then used a coagulation analyzer to test the effects of snake venom on 10 different snakes on dog and cat plasma in the lab. Once again, cats scored a higher survivability rate. All venoms acted faster on dog plasma than on cat plasma. They theorize that the blood clotting in dogs fails quicker than in cats, thus
making dogs more vulnerable to venomous bites.

Two more reasons for why dogs are on the losing end of a snake encounter than cats. “Dogs typically investigate with their noses and mouths, which are highly vascularized areas. Cats often swat with their paws,” says Dr. Fry. “And, dogs are usually more active than cats, which is not great after a bite has taken place because the best practice is to remain as still as possible to slow the spread of the venom through the body.”

Here are some do’s and don’ts on what to do should your dog or cat get bitten by a snake from
veterinarians:

* Don’t waste time trying to kill the snake.
* Do carefully and slowly move your pet out of harm’s way.
* Don’t suck the venom out of the wound. You risk injecting the venom.
* Do keep the bite site positioned lower than the pet’s heart. The reason? You want to keep the venom-infected blood away from the pet’s heart as long as possible.
* Don’t put ice on the bite site as you can cause the body to go into shock by this sudden coldness. Don’t pour hydrogen peroxide on the wound as the liquid will damage healthy tissue surrounding the bite site and make the situation worse.
* Do call the nearest veterinary clinic to alert them of your estimated arrival.
* Do monitor’s your pet’s respiratory rate and be prepared to do CPR and rescue breathing (mouth-to-snout breaths) is your pet collapses and becomes unconscious.
* Do keep your pet as calm as possible.

Remember to keep yourself from being bitten as you render aid to your pet. About 80 percent of snake bites on people happen when people try to handle the snake or kill it. Even if the head has been severed from the body, a snake can still bite for hours after death due to lingering nerve
reflexes.

To reduce the chance of your pets from encountering a venomous snake, here are some
preventive tips:
* Keep your dog on a leash during hikes, especially if your dog does not consistently come when you call him or has a high prey drive toward squirrels, birds and yes, snakes. Stick with a four-foot or six-foot leash for better control of your dog.
* Avoid going off-trail and walking in long grass or rocky terrains where snakes like to hang out.
* Reduce snaking spots in your yard by keeping your lawn mowed and not creating any rock piles or brush piles where snakes like to hide and sun.
* Reduce a snake’s attraction into your yard by cleaning up any spilled birdseed that attracts rodents and their predator: snakes.

Learn more about ways to keep your dogs and cats safe by visiting http://www.propethero.com

And, if you are interested in becoming a ProPetHero instructor, please click on the BECOME AN INSTRUCTOR button on the homepage for more details.