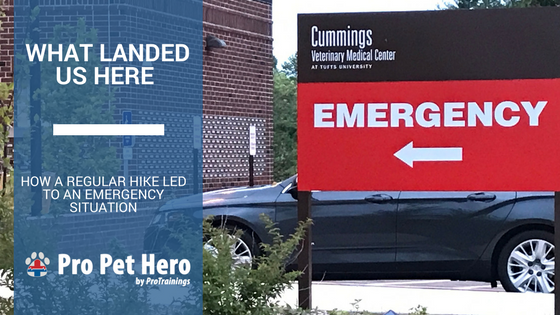 Well, despite writing a blog post with 12 tips on how to help your pet cope with the heat, I sadly found myself with a suffering pup.

Nothing out of the Ordinary

As we have done countless early mornings, we took our 3 Boxers for a romp at an aqueduct near us. It has flat open trails, a pond, wooded trails and is ideal to visit for my rambunctious bunch. The temperature was 70 degrees when we started out but what we did not account for was the humidity.

All was well into our 3 mile journey, a trail we have taken hundreds of times with countless dogs. My oldest Boxer Debbie, loves to run at full speed to take a dip and drink in the pond where the trail begins to turn. This day was no different, her 19 month old puppies in hot pursuit, life was great.

It Came on Suddenly

After her jaunt back up the side of the embankment she ran around for a bit more. Then at 8:40 am the problems began. Debbie initially just threw up tons of water and the treats she had been given for recall/good behavior along the way – tiny home-cooked beef heart. Then she threw up again, more water, a few more treats. Then again and again until just foam. She started to tremble then her breathing became shallower, she should have been panting hard from all the running.

My training kicked in, I check her gums, they were OK in color, I checked her responses to my calling her name, she was conscious and alert. Her eyes were glassy and she was hunched over in discomfort. I immediately thought bloat. Her stomach was soft to the touch but maybe the gas hadn’t built up yet.

We leashed her and tried to walk on but then suddenly in less than a minute she went from hunched walking to staggering like a drunken sailor. We have to carry her!

1.5 miles in high humidity when your adrenaline is going is the LONGEST 1.5 miles of your life. My husband and I took turns carrying our 50.9 pound dog. The puppies were leashed up and whoever wasn’t carrying Debbie, walked the other two.

We set her down to take breaks and and check her vitals along the way – my heart was sinking. I was upset that my “mommy” strength wasn’t kicking in and that she felt so incredibly heavy. I was upset that our water bottles – which we had two large ones – were all the way back at the car. I was upset that I wasn’t better prepared but we had to make it back.

On one of the stops she defecated, it was pretty normal and while one carried the other checked her level of consciousness, it was surprisingly good given her drooped head and limp body. Her gums were getting lighter and her mouth was dry. We could feel her stomach retching as we held her in our arms. Her body was rejecting something, was it the pond water? Her puppies had drank from it as well, they all have for years. My mind raced to the weed spray we saw happening there the other day but it had down-poured the night before, was it not safe?

My mind raced the 16 minutes it took us to get back. I was worried about 3 things, bloat, toxicity and heat exhaustion/stroke.

We got back to the car and started to cover her with water from one of the bottles, getting her feet, belly, head and back. The puppies each got some in their bowls, everyone was crated up and we headed for the emergency veterinary hospital.

The ER Vet Seemed So Far

It took 23 minutes to get there, I drove safely because I knew getting into an accident doesn’t save any lives, it would take more. The struggle between worry and the knowledge of the distance we were from the closest ER vet was unnerving.

We are absolutely fortunate to live within a half hour of one of the best veterinary schools in the world, Tufts.

We pulled in, parked, left the car running and locked with the puppies inside. Debbie was dramatically better. She could walk, albeit slowly so we let her move around outside on the front lawn before heading in. She then proceeded to have a very bloody diarrhea, she had all the signs now of a heat problem so in we went.

The front desk called for a tech immediately, not sure we waited half a second. How she got to this state was described and our dog was whisked away while we waited. We eventually were brought back to a room and told that while she had clearly improved, a blood test had revealed she was very hemoconcentrated – she had low blood volume, was dehydrated and the ability for her blood to get to all of her tissues was compromised.

We still are not sure if it was the heat or something in the pond but we got lucky. She was put on IV fluids and watched for 12 hours. She returned home swollen from the fluids and sleepy. It has taken her two days to recover to what I would say is her normal and we will continue to rest her.

How Fast Normal Can Change to Not

We faced several issues on our seemingly normal hike, all very possible, one becoming a reality. Lessons have been taken from this and water will ALWAYS be carried on us. My husband and I will practice carrying the dogs together, our male puppy weighs 15 pounds more than Debbie, what would have happened if this happened to him?

We will never hike them with only one human present. We also will make certain they have had water prior to their exercise – an hour or more before to avoid bloat. Debbie had not drunk since around eight o’clock the previous night. She had not been fed breakfast as we do not feed before rigorous exercise to avoid bloat. She was most likely overheated and clearly then became dehydrated. It was too late by the time she ran down to the pond. Her body was reaching a point where it needed the water earlier so any water that went in, came up due her body’s inability to regulate.

Please always think on your toes and be able to think and react like my husband and I did. The most crucial lesson I learned from this was we were all she had. There are no animal EMT’s, there wasn’t anyone that would help us get her the care she needed as fast as she needed it. Debbie went for over 45 minutes in a bad state, it could have been so much worse.

Debbie recovering after being dehydrated. Her swelling decreased and the only evidence is her shaved front leg

This was a no-brainer for us but had we been hiking in the White Mountains or somewhere not near our house, we wouldn’t have known the exact route. Don’t depend on GPS – signals fail.

If you’re around your home always think about the fastest route to the ER vet, if you are traveling, have the address written down and take a screenshot on your phone of a map of the area. Don’t rely on technology to get you there.

We have to be reliable and responsible for our pets because our pets rely on our responsibility for them. Know what to do in an emergency so you can make a bad situation better. Debbie was lucky but this all could have been avoided had we made certain she was hydrated before going on her hike – at the very least, had water on us.