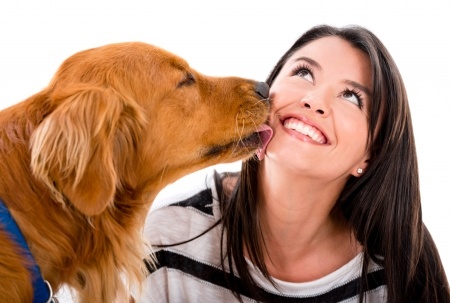 Yep, licks can equal likes as well as dislikes, anxiety, hunger, love, and fear. They pretty much can mean anything but I want to take some time to discover the most common reasons dogs lick and the most frequent things they lick.

There are a variety of reasons your pup might lick you in a variety of places. From birth, puppies are stimulated to go to the bathroom by their mother before their little bodies can do it on their own. During and even beyond their ability to pee on their own accord, the stimulating licking also serves to keep the pup clean and healthy. This is a nice feeling that dogs learn means their mother cares.

The same behavior can be passed on from your dog to you. Licking you indiscriminately – not when you have a glop of peanut butter on your face – can mean your dog cares for you. Your dog has learned that licking keeps things clean and is a tender way of telling you they care – or they could seriously just be hungry.

I have 3 dogs and all are very different in their licking habits. The mother of my two 14 mo old puppies is very kissy. She’s selective in that she will only kiss humans she knows and knows well. I always tell people you are in her inner circle when you get a kiss, but watch out, because she’s hard to get to stop!

My other two very rarely kiss, the little female puppy will do so when I first come home but beyond that, she keeps her tongue-tied. The male pup will slip you some tongue when he’s being shy or reserved and when you ask for it. It’s not his favorite thing to do and he definitely doesn’t do so to show affection.

Now, the same male puppy that rarely licks his humans, will lick the heck out of glass. He likes windows and in particular, glass tankards. This one just had water in it.

As for dogs licking other items, it can be just because they like them or it has become a behavior – a way to dispel pent up energy or anxiety. The same way as we may bite our nails, fidget, whistle or drum our fingers on a desk a dog may lick something seemingly odd. Now I’m not talking about the dog that runs to the dishwasher to help pre-wash, this is the dog that will lick a spot on the rug, your couch or even the wall!

There are many reasons a dog may lick their paws, there could be an injury, something stuck in them, an

irritant to their skin, a yeast infection or it could very well be behavioral. Right now my girl puppy licks the heck out of her back feet. She has been to the vet and we have determined she has a yeast problem, with a food switch we were able to ease the itch. However, despite the yeast clear-up, we still find her licking away. This can be due to her constant licking having developed into a habit. Whereas now her paws no longer bother her, she has become so used to licking that it has, in essence, become a soothing behavior for her. We are working on breaking this with distraction and redirection behaviors and have noticed a big difference in a few short weeks.

The danger with the behavioral licking of their paws or incessant licking anywhere is that it can lead to potential harm. Lick granulomas are wounds created by incessant licking. The licking can start because of a wound, irritant or even as a soothing behavior, which can quickly turn destructive. If you notice any wounds developing or getting worse due to licking, consult with your veterinarian and look into de-stressing activities for your pup if you believe that could be the issue.

Why Do Dogs Lick Everything?

As you can see there are plenty of reasons your pup could press their tongue against things. From love to nerves, licking is one behavior with a multitude of meanings. Much like wagging their tail – that’s a tale for another post! For more info on why your dog licks and awesome videos, you can always check out our friends at Why Does My Dog ______?

All licks aside if you notice any sores or wounds please take your dog to the vet to have it checked out, especially if it is constant. Also take our pet first aid course, which will train you to be on the lookout for strange things like a new licking behavior. You may have started using a new ice melt that is burning your pup’s paws or they’ve gotten into something that might taste yummy but it will be a GI nightmare later. Learning to be aware and be your pet’s hero is a safe way to avoid problems from becoming bigger issues.