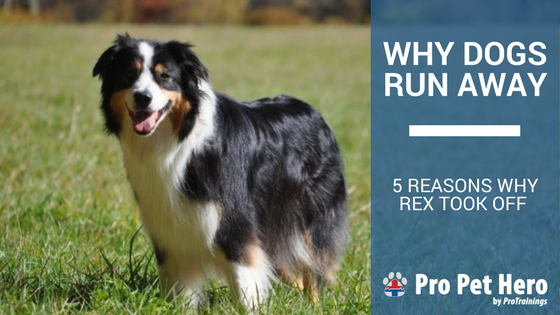 By now many of you have heard about the story of Finding Gobi, the little dog that ran a big way into Dion Leonard’s heart. This dog literally ran across the Gobi Desert claiming Leonard as his new life.

courtesy of our friends from @findinggobi

When it comes down to it, Gobi was running away from something. We don’t know exactly what but she was on a mission to get away from her previous life and join Dion Leonard in his. Their story is truly unbelievable, I highly recommend checking it out.

This however brings me to the question; just why do dogs run away? Turns out it’s relatively common and there are five common reasons why your best friend might take a hiatus.

Why Do Dogs Run Away?

Depending on the mix or breed of your dog, sometimes life at home just isn’t as stimulating as they need. The typical pet owner works quite a bit leaving Buddy home bored. Unless you’ve hired a dog walker or have entertainment for an active pup, you might find they’ll escape and go on a walk-about.

Don’t take offense, its not because they don’t love their home and you, but when you’re not around and their brain is left to its own devices – the clever canine might come out.

There are two ways to prevent unplanned adventures, 1) make certain they are secure as is your house. You would be surprised by what some dogs can escape out of, a 10 ft fence, especially if chainlink makes a nice latter for an agile dog.

2) Make sure your canine is entertained. Yes dogs sleep on average eight hours more than humans but the more activity they can experience during the day while you are at work, the safer they and your house will be.

While you might provide all the love a dog could possibly need, nature can pull a bit harder on the heartstrings than your devotion or even high quality dog food. I have intact dogs – meaning they all have the internal organs with which they were born. While they are highly trained, we know we are dealing with nature so our intact male in particular gets a shorter leash. He still gets to run about freely but we have learned to notice when his brain keys into “the smell of nature” and he has to go back on the lead.

Intact dogs should never be left unsupervised. No matter how tired you may think they are from that three mile run you just did, the smell of a lady dog in season will trump most any energy level.

For many breeds and mixes this is an innate behavior that even excellent training might not be able to curb. Prey drive is chasing after fast moving, usually small objects like squirrels, birds, bunnies etc. I know many trainers can assist with redirecting this behavior but when a dog is left to their own devices – say in a yard – and they see said prey, if they get out of the yard, they’re gone until they lose chase or get their target.

Finding their way home while a priority for some pooches, is not always possible.

While this could be coupled with the curiosity of seeking an adventure, some dogs just do not like to be confined. While dogs are den animals who seek cavernous, dark places to dwell – they like to make the den of their choice, not the one in the living room or back yard that you chose for them.

As a professional dog walker I have met many canines that campaigned against confinement. They would escape their crate, the x-pen used to keep them in one area, jump gates and even dig wholes under fences. These pups might have been well trained and well stimulated through exercise but for one reason or another – confinement was not in their bag.

I can tell you baby gates do not keep Boxers back.

Fight or flight is real and in most circumstances, a canine would chose to cruise instead of bruise. 4th of July holiday fireworks leave animal shelters chock full of runaways on the 5th. Nail-guns, claps of thunder or even stress can cause your canine to take off. Out and about on our walks with client canines we have found or helped the animal control officer capture many fearful pups that took off.

When a dog is in flight mode, they tend to sprint erratically so finding their way back home or to you is not an easy task. They didn’t leave themselves a familiar trail.

It’s the best measure to keeping your canine companion safe. Not only proper identification but also properly fitting collars. I have seen and had so many dogs slip their collars or harness from being fitted incorrectly.

Create the most high value word you possibly can so in emergency situations – it can trump all others. “Buddy Come” wears off after a 1000 times of saying it and certainly doesn’t mean much when they are chasing prey or are afraid. Train your dog on a command word you never use and give the BIGGEST reward possible.

We had a client that trained their two black Labs that “Bingo” meant stop whatever they were doing and come back for a juicy steak. They trained this frequently and always rewarded. It paid off when they needed to use it. A landscaper left their gate open and the dogs were no where to be seen. The owner yelled “Bingo” and sure enough the dogo’s came flocking back.

If your pooch does go on the prowl and you have a visual on them – do not offer a foot pursuit, unless you’re an olympic runner! We posted earlier about why you should not chase a loose dog and offer some usual tips for winning them back without a race.

Do you have a story of an escaping canine and how you got them back? We’d love to hear all about it.