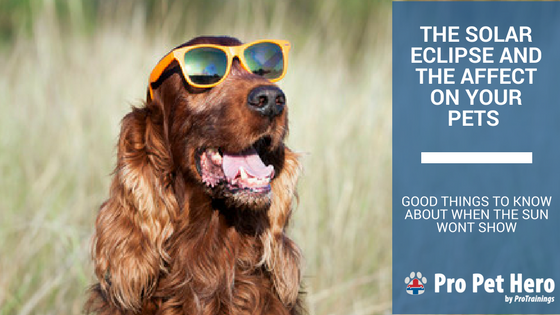 I attended a networking event the other evening hosted by Nancy Hassel from American Pet Professionals and the presenter, Jane Harrell from ’cause digital marketing brought up a good idea to discuss, and one that just happens to be trending.

I generally stay away from the trendy pet stuff like the newest product being showcased or some celebrity pet story but when the topic concerns the health and wellbeing of our furry best friends – I’m all over it.

So what the heck does it have to do with your pets and why in the world is that topic trending?

Technically the total solar eclipse that we are about to witness is perfectly safe to look up at, it’s the time before and after the sun reemerges that’s the most dangerous.

The danger lies in the damage that can be caused to our eyes and those of our pets. The light rays and UV rays cause some serious damage if looked directly into and this is particularly harmful for children and pets. Their eyes are younger, clearer and less protected from the harmful heat, light and rays.

Just as you would take a magnifying glass and burn holes in paper as a child, the lens in our eyes acts very much the same way. At the right angle, we could very easily burn the backs of our eyes, better known as our retinas.

Will they even notice it? That is a great question. Scientists believe that wildlife like bats and crickets are more likely to be affected by the eclipse than our furry friends. These animals might start their nightly routines a bit on the early side but otherwise life will not be terribly affected for most.

The ways in which our pets could and would be affected is not only the safety of their eyes as mentioned above, but their exposure to crowds watching the event or even the doors of the house opening as you and your visitors enter and exit to view the phenomenon.

As with any other event that has crowds of people and lots of distraction – like looking up at the sky for long periods of time – keep your pets at home.

If you are at home and want them to witness the amazingness and you expect to be pointing in the direction of the mystical ball of fire, consider sunglasses. They do make goggles for pets, and yes I have a pair.

What are your plans for your pets during the eclipse? Do you have a picture of them in sunglasses or doggles? Share them with us on our Facebook, Twitter and Instagram accounts via the posts below!

Will My Pets Be Affected by the Solar Eclipse? https://t.co/JWt58462Os