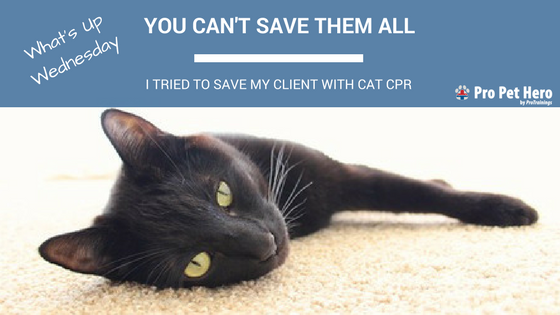 It sounds so harsh but I’d rather you hear from me than experience it for yourself like I did.

Since 2011 I was a pet first aid and CPR instructor, I felt confident that not only did I possess the skills to save pet lives, I also have the ability to teach others. The one thing I was lacking, however, was the fact that I hadn’t saved a pet’s life before – except for the many first aid wounds I had tended to, but in terms of a life or death emergency, I hadn’t saved one.

This is not to say that I haven’t performed CPR. I have and while it was unsuccessful, the lessons I learned are sharp in my mind and will stay with me as long as my mind does.

I was cat sitting for two cats that lived in an apartment. Both hid pretty well, one up on the shelf in the closet, the other pretty much always under the bed. I always made sure to dig my way to them and check their alertness, movement breathing etc. and always had what was left in the litter boxes, or not in the food bowls to tell me how things were going.

Five days into a seven day sit things were pretty normal. The day before there had been some vomit on the carpet but that was relatively normal for these cats. It was mostly mucous with a bit of hair, not quite a hairball but still relatively normal. The boxes had their typical number of poops and pees and the food bowl had depleted as usual. The cats were in their predictable hiding spots, eyes open, alert and with the anticipation of my departure, they were not too interested in my presence, but occasionally would come out to make certain their box was cleaned or food topped off while I was still there.

It was the sixth day where things immediately were off. I walked in and saw the under-the-bed cat Brody sprawled out on the bedroom carpet. His front legs were splayed as if on an autopsy report and I could see very shallow breathing. I rushed over, checked his pupillary response which was slow and lifted his lips. His previously bubble gum pink and moist gums were gray and tacky. Time to find the carrier.

As I crawled through the closet finding the carrier, which needed to be assembled, I called the owners immediately. They were in Aruba for their honeymoon, on their last day. I was able to get ahold of them and told them I was taking Brody to the ER veterinary hospital about 5 minutes down the road, we are so fortunate to have one so close to the massive apartment complex in which so many pets resided.

I snapped together the carrier and gingerly placed Brody inside. He was lethargic and didn’t put up a struggle, but he was breathing and his eyes were open.

I ran to my car and pulled out of the parking spot, winding my way down the massive apartment complex road. I made it to the stop light where I was to pull onto the main road and just got that feeling in my stomach – the one that said, “check on the cat.”

Even though the carrier was seatbelted into the passenger seat I couldn’t see through all the cross bars on his carrier door so I unlatched it to find him face down. He was unconscious, he was not breathing, he had no pulse.

Immediately my skills kicked in and I grabbed him and cradled him in my arms so I could begin compressions. 30 compressions to 2 breaths, holding his chest between my grip and placing his entire face in mind for each breath. I did at least 3 sets, time was going so slowly, it felt like I was there for an hour. I had to decide, continue or get to the hospital? I chose to drive to the hospital after what seemed like minutes of trying to revive him.

On the way, I called the facility to let them know I was coming with a cat that was conscious with shallow breathing about 3 minutes ago and while I had performed CPR, I was not successful in reviving him. He currently was not breathing and no pulse. I gave as much information as I could as I drove towards them. I knew not to race or drive recklessly or I would only cause further harm – that five-minute drive felt like 50 minutes.

I made it to the parking lot of the vet, ripped his carrier out of the front seat and rushed through the sliding doors. I knew the place well from other emergencies and their specialist like ophthalmology for my own dogs. The staff greeted me, grabbed the carrier and asked me if they had my permission to restart CPR, I, of course, said yes!

The receptionist then guided me to fill out paperwork. They knew I was the sitter and while this was prior to my use of pet sitting software, I thankfully had everything on Google docs, including the authorized amount to spend to save my client’s cat’s life.

After a few minutes, I had lost track at the point a veterinarian came out to talk to me. She said while they were still doing CPR she had noticed his abdomen was distended and therefore she aspirated it with a needle. She found large amounts of blood from what she suspected was a burst tumor on his liver. She said he had all the signs, which often didn’t include many symptoms that I or the owners would have noticed. The vomiting was probably related to it but that is so normal for these cats, I was kicking myself.

Then she asked the question, she asked if I would sign off on having Brody put to sleep. She felt that with the blood loss there was nothing anyone could do. I asked her to please call the owners, I felt that it was better for her to deliver that message to them.

Was I a Failure?

It was at that point I felt like the greatest failure and simultaneously like I had done all that I could. My professionalism faded and the tears began. The vet who had not walked away just yet reached out to touch my shoulder and said, “there was absolutely nothing you could have done, in fact, you did more than could have been possible, you were there for him in his final moments. That’s what he needed most and you gave that to him.”

She turned to walk away and I was ushered into the room – the room where people with pets they are putting to sleep are placed. It has couches, magazines, and plenty of tissues. It was there that I lost it, I completely and utterly lost my emotions and broke down crying. I was so upset, it was the last day of their honeymoon, this was the first cat they got together, they had hired me to keep him healthy and alive while they went away. They hired me, the pet first aid and CPR instructor, the professional pet sitter, but even I wasn’t enough. A greater power decided Brody’s fate.

I’m crying as I write this, I always think that time will pass and it won’t affect me as emotionally but it does. I now know very well that I didn’t technically fail and Brody was lucky to have not died alone without a warm touch.

I feel immense gratitude and empathy towards it now. The gratitude is for that veterinarian who had the impossible job of telling these owners their cat is dying and for her amazingly comforting words she shared with me. I feel like we overlook these true heroes that day in and day out deal with a death of people’s loved pets. I had one incident, and it still haunts me, she’s had hundreds.

The empathy I have is for the clients. They were enjoying their honeymoon and would come back to the loss of their beloved cat. They adored Brody and even sent me flowers and a thank you card, their kindness and acceptance were overwhelming.

I Leave the Teaching to the Life-Savers

When I look back I didn’t discontinue teaching pet first aid & CPR because I felt like I had failed, in fact, I will continue to share my unsuccessful story for its value and purpose. I thought that it was best taught by someone in the veterinary profession, who uses their life-saving skills daily.

When ProPetHero launched and I saw that it was being taught by an ER veterinarian who is also a professor of ER and critical care veterinary medicine, I knew that was the person to teach me and my pet care staff. She reminds me of the vet that made my tragic cat story have a purpose, meaning and ultimately made me learn that at the very least if we can be there for them in their final moments, we have accomplished more than we could imagine.